I have many girlfriends, who like me, score the aisles of various supermarkets in search of the organic cucumbers at Coop, the chicken and Waitrose cans at Spinneys, the cereals at the Organic store, the pretzels and New Zealand apples  (100% crunch guaranteed) at Park and Shop, the Indian veal at Choitram and the French turkey breasts at Carrefour.

I ALWAYS shop with one, two or three kids. Food shopping with no kids is like watching Toy Story without them. Not only does  it keep them entertained but they also enjoy quality and educational time with their mom. (Who needs Kidzania to learn about weighing fruits and baging food by category?)


Usually accompanied by my youngest (the other two at activities), we drive along the aisles chatting in classical Arabic and we shock the veiled Arab women at Coop, who cannot identify our origin (how is it they don't speak a dialect? Why do they speak TV arabic together?) and possibly identify our blond hair and caramel skin as Bosnian.

Today at Spinneys, in a rush to drop my daughter at a play date and pickup my son from swim team, I was bagging my Waitrose cans and special chicken, when the cashier asked me:

The Muslim part was pronounced with a U rather than an Americanized O sound. I remembered I was wearing my ayat alkursi pendant and responded affirmatively to his surprised question.  That moment of "bonding" was very different from another experience I once  had.

A few summers ago, I was walking in the park in Geneva, wearing a T-Shirt my sister had gotten me from Stanford. The Jarding des Anglais parc is reputed for its loitering drug dealers (most of them Moroccan). It was broad daylight but drugdealing is a reality in this permissive country.  I was wearing a Stanford T shirt with the Stanford pine tree on the chest and on the back was a Muslim Week Awareness Message with its logo: "Got Islam? "(Referring to the  "Got Milk" campaign you are probably familiar with). I suddenly felt a hot breath in my neck and a drug dealer was whispering in my ears:

I turned around, disgusted and fruious and I blurted a "dkhol fi souk rasak!" which is Moroccan for "get lost!". I had taken a seminar while in Boston on Moroccan dialect and  in that instance, it  had finally served its purpose. 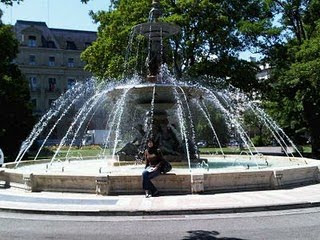