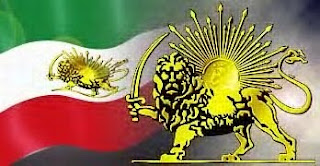 The Lion and Sun, the emblem of Pahlavi Iran
1979 was an eventful political year and a milestone year for me. I was nine and aware of what was happening in my motherland.

A revolution had occurred at our doorstep.

I didn't grow in a household or even in an extended family where events were explained to me. I witnessed them third hand, and interpreted the reactions and eaves dropped on conversations that never seemed passionate or biased. In fact, I hardly remember much criticism of a new regime that had transformed my family's life. They were just struggling with the pride of affirming their identity and preserving it.

"Where are you from?" The eternal American question.
"From Iran". They never hid behind the pretentious "Persian".
"Oh?......you must be from the Ancien regime?" I was French speaking and didn't need explaining.
The adults would reply: "not old or new regime, just Iranian". I think I heard my mom shock more than one with "new regime".

My aunts had a small picture of the Shah framed and put almost negligently on a coffee table in their Utah living rooms. A way of remembering times lost. Eventually those pictures made room for their own grandchildren's. I used to look at the picture of the Shah and wonder.

My grandfather had pictures of himself with the Shah. He had once even emptied the contents of his house in Shiraz to host the Shah (I think his ten kids had to sleep at his sister's). But hosting the Shah or receiving him at hospital openings didn't mean he was a supporter of the Shah. My grandfather was serving his country and developing the health infrastructure. He was his own man, never one to partake in personality cults.

I think I inherited that philosophy and have always questioned royalist feelings. When I was introduced to the late Shah's son Ali Reza, who was my classmate at Harvard, I spoke to him without any reverence, as an equal.
A few years later, I visited the palace of the Shah in Niaravan. I walked the cordoned corridors and peered into the Shah's bedroom, the way tourists pear into the royal bedroom at Versailles but here I noticed, in all surprise, that it wasn't a palace, just a nobleman's house. Perhaps, they had overspent at the Peacock throne party, but the house was a humble one.

Incidentally, I also visited Khomeiny's home and "arena" where he gave his most spectacular speeches. It wasn't an arena that could hold thousands of people as appeared in the historical photos, just a medium size amphitheater that could host a hundred spectators at most. Incredible, the  manipulative power of photography. Photographs can distort history: old or new regime!!
Posted by PinkTaxiBlogger at 6:31 AM