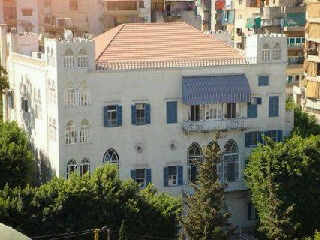 The Salaam House in Mussaitbeh
The title of this blog is a reference to Salibi's House of Many Mansions.

Saeb Salaam was the patriarch of our family. He propelled our family into the political arena as he was prime minister of Lebanon for many terms (60-63,64-67,70-73). I hardly ever meet a Lebanese without them asking me "shou biya'rblik Saeb Beyk?" (How are you related to Mr. Saeb?)

My encounters with him were always familial though. He was a very approachable man and gave me time, treating me like his own grand daughter and not like a grand niece which I was to him.

When I think of him, I remember his charisma. In state pictures, with the heads of state of the world, he often wore a carnation in his lapel. It had become his trademark. I recall his elegant clothing, the cigars he smoked, the dictionary close at hand, next to the television remote.

I used to visit him in Geneva. I would run from the dorms to have lunch with him. He referred to the dictionary many times. As a teenager, I didn't bother quizzing him on his past experiences. I would sit with him and converse, about any topic he brought up.

He would then take me for a long walk in a Geneva park. He showed me the cedars. He explained that there were more cedars in his city of exile than  in his home land, of which the cedar is the emblem. In fact the first Lebanese flag was inaugurated in the Mussaytbeh house of Salaam family. In Geneva, the cedars always remind me of my Amou Saeb.

He, the true "Zaim of Beyrouth" (or leader)  was always openly proud of my academic accomplishments, and enjoyed flattering me with the nickname: "Zaimat Harvard". He always told me that opportunities were meant to be caught as they flew by us.

When I sent him a graduation invitation he replied with a special card. The card had a drawing of the Salaam family house in ‎​Mosaitbeh that he lived in before leaving for Geneva. He courteously wrote: "your grandfather's home", referring to his older brother Mohammed, who had passed away when my father was only a teenager. 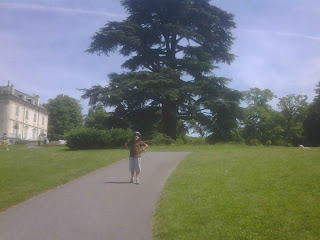 Posted by PinkTaxiBlogger at 6:34 AM