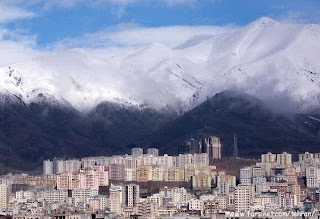 Tehran
I barely knew my maternal great grandmother' proper name (Faranggis). I always knew her to be 100 years old. Her hair, in two small braids, was white like snow. She looked like an Indian chieftain (her skin was dark and her nose prominent) and was treated as one. Khanoum Joun, as I knew her, means Dear Lady in farsi.


She was my grand father's mother and lived with him, as far as I remember. When they lived in Tehran, I believe her apartment was above the garage. We used to climb narrow stairs to visit her. In my child's mind, I thought it was a Rapunzel tower. She eventually moved to a bedroom in the main house, on the first floor. I recall stories of her locking up goodies away from her ten grand children, in case a visitor came by. Once the pomegranates she had stored there exploded due to the heat of her closet.

She only spoke Farsi and I believe trying to communicate with her enabled me to learn my maternal language. My parents always encouraged me to spend time with her. My mother was so close to her that my father often said that my American grandmother had only incubated her daughter but that she was every inch an Iranian, so close were my mother's conservative way of life to her grandmother's.

Indeed it was also with Khanoom Joun that my Lebanese father undoubtedly learned to understand and then speak Farsi. I can recall their theological conversations. My father is a Sunni Muslim and Khanoum joun a Shiite Muslim. My father used to attempt to erase the divide, to explain that they were fellow Muslims, she would repeat: "Heif! (Shame!) I like you. I wish you weren't Sunni."

Khanoom Joon followed her son to Dubai. My grandparents somehow squeezed the elderly woman, and remaining four to five grown kids in a three bedroom villa. I recall breakfast time, Khanoum Joun with her hot tea and infamous pile of buttered toast. When Pet Shop Boys sings about "piles of toast and empty promises" I think of her.

And so to Salt Lake City she followed her beloved son and American daughter in law. At the time, forgetful (she was in her 90s and probably had light Althzimer) she believed she was back in Tehran. As you can see from the photograph above of Tehran, and the one below of Salt Lake City, the topography of both cities is very similar, mountainous with dry weather. 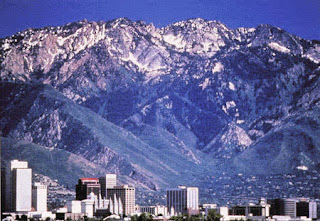 Salt Lake City
In her mind, picnics by mountain streams or drives to Snowbird were thought to be outings in Tehran. She spoke to Americans in Farsi and was surprised how "no one speaks her language anymore". From her room, downstairs, she would call up to the rest of us upstairs in the kitchen and living area , "Balaya! Balaya!" (People above!) She mistook my handsome grandfather for her own long lost spouse.

She got wed in an arranged marriage. She had fallen in love with his looks and he had wondered how he had ended with a woman with a large nose. They had discovered each other for the first time in the Ayneh (the symbolic mirror that still presides over Iranian weddings).

In the 1930s, she sold her dowry to send her only son to the United States to study with her brother who had preceded him. And that is where our family lineage truly begins. For my grandfather had changed his family name from Fatemi to Mehra to symbolise this new start.
Posted by PinkTaxiBlogger at 7:25 AM