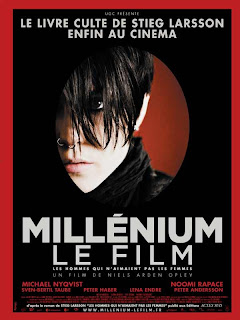 I never read detective stories. It's just not my style. But I had to see the movie version of the Millennium. I remember it showing last year and I rejected the idea, because it looked weird and of course because it was a detective story.


My Swedish friend read the book and mentioned what I knew by now: that it had become a craze, with its followers. The book is a trilogy. Part I came out last summer, Part II and III this summer. Last night I watched Part I on DVD, dubbed in French.

Tonight I selected an Argentinian movie, "Los Secretos de Sus Ojos". I thought it would change my ideas from last night's Millennium. I knew it had won an Oscar for Best Foreign Movie recently, so I made an effort to go see it at the cemetery of old movies, the picture house that shows the out dated movies. Always an opportunity to catch a movie you have missed!

Coincidentally, it was a detective movie as well. The plots turned out to be very similar. A male detective and his lover look into an unsolved case that had been long closed (in both cases, twenty years ago): the murder of a young beautiful woman. In both tales, the detectives look through archives and each one finds a photograph of the murdered beautiful woman. In the Swedish version, she is staring at a man (her killer). In the Argentinian film, the killer is looking at the woman he loves and kills. Both clues discovered in photographs, both found in the direction of the stare.

Mind you, I have not traveled to either Argentina or Sweden. I know the Scandinavian country only through contact with my mother's Swedish friend and my own friend. I have also tried to read The Wonderful Adventures of Niels by Selma Lagerlof. Argentina I had studied in Latin American Literature. My advisor was Argentinian. I can recognize an Argentinian accent from another Latin one.

Cinematography was equivalently beautiful in both. The Scandinavian landscapes or the Argentinian ones. However, the tone, the cadence, the rhythms were different. The Northern was more crude, more violent; the Southern was more romanticized, more poetic. In both cases, the girl friends of the detectives were strong women. However it was expressed differently. The Swedish woman had a troubled past and masked it in a punk, rebellious, tattooed and pierced look and attitude. The Argentinian woman was composed, elegant and had a strong verbal presence. In both cases, the love between the detective and his woman is impossible. However, the Argentinian love was romanticized much more than the Scandinavian film, which translated love into matter of fact sex scenes.

I remain ambivalent about the extent to which I enjoy detective movies, but if I had to choose one over the other it would be "El Secreto de Sus Ojos". I particularly remembered a sentence from it, a true oxymoron pronounced: la vida llena de nada (life empty with nothingness).
Posted by PinkTaxiBlogger at 3:07 AM