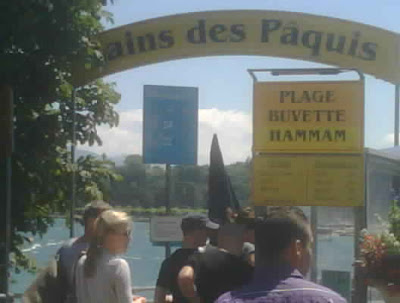 Geneva restaurants are reknown for their consistency and quality. Any "plat du jour" in a random restaurant, albeit often overpriced, will be above average. Many times restaurants will astonish you, and  be extravagantly delicious.
Today, a family of four visited my family in Geneva as they travelled through Europe. After a full circle tour of Lake Geneva by bike with the kids, and a trip on the infamous mouettes, we decided to stop at Les Bain des Paquis for lunch.

Les Bains des Paquis is an institution in Geneva. It consists of a public jetee, with an interesting 1950s flavor, that caters to mostly grungy Swiss hipsters and gives them a locale on the lake to sunbathe, swim, have lunch and even use the sauna!  The restaurant serves three types of salads and one plat du jour, which was a very unique red pesto pasta . The five children present decided to be adventurous, and agreed to try the pasta dish, which they did enjoy. The adults had surprisingly good greek salads drenched in an extra- virgin olive oil. Despite the overcast weather,  and their stomachs satiated, our children bravely dived into the cold lake and enjoyed themselves.


Our evening meal at the Auberge D'Onex was quite different. It was my wedding anniversary, and although my husband in Dubai couldn't make it to Geneva in time to celebrate, despite his best attempts, I still commemorated our twelve years, with his two oldest friends and their spouses. Of course we missed him terribly.
The Auberge d'Onex is a tradition. It is a restaurant that deserves a grand occasion, a birthday or the celebration of an anniversary. My husband and I have celebrated six of our twelve anniversaries at Onex. In fact, on one such occasion, as we were taking the bus there, I noticed I had two bus tickets in my jacket (one dating from the year prior). On another bus trip there, concerned about missing  our stop, I asked the driver when we should disembark for the Auberge d'Onex. He  looked at me, the penny wise bus rider, quizically, then asked : "Madame, do you work there or will you eat there?", as he probably thought me pound foolish for dining there.

On a third occasion, I went there with a friend who was visiting from the United States. She had insisted on inviting me. I informed her that they were a cash only establishment. She told me not to worry. It was half way through the meal that she confidently assured me that she had traveler's checks, which of course was not accepted there. I  immediately summoned the waiter and,  giving him our budget which we calculated to the last coins in our wallets, I requested he tell us when to stop ordering, lest we be forced to clean the dishes to pay for our meal!

The Auberge d'Onex is a gargantuesque experience. It is a true feast for both eyes and stomach. Tonight, we started off with the introductory frills of olives, radish, parmesan blocks, cherry tomatoes, all beautifully presented in large bowls. We then advanced onto our appetizers, followed by five different but equally scrumptuous risottos. For dessert, they showered us with fruit, nougat, candies and chocolates, on top of the desserts we each had selected. The lemon tart, very zesty, was the best I had ever tasted, and the white chocolate and coffee mousse felt like clouds of....cream! Each dish was presented as a still life painting.


From a light lunch on the lake, to a delicious Italian feast, these are but a few tastes and flavors of Geneva's culinary world, which I, a secret bon vivant at heart (don't tell my pilates instructor!!) indulged in thoroughly. 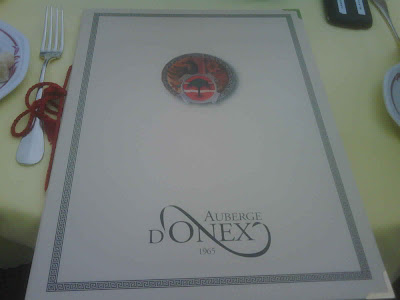 Posted by PinkTaxiBlogger at 7:43 PM