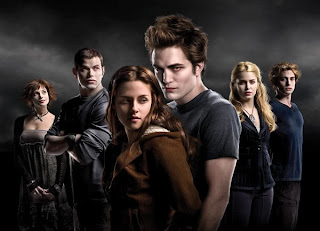 I saw Eclipse, part 3 of the trilogy Twilight and I absolutely enjoyed it, like I did the first two.

Don't take the fun out of it and cast it aside because it's a vampire movie. It is so much more and that explains its strong fan base.

As a point of information, the writer of the books (which I have not read) is a Mormon who composed her stories in secret, lest she loose her Temple privileges. I wouldn't think she has written anything blasphemous. In fact, the whole story is based on one topic sentence: Edward the Vampire loves Belle but doesn't have premarital sex with her because promiscuity may incur out of control vampire desires and he may bite her and transform her into a vampire as well.

First, I enjoyed watching the film for the entertainment. The landscapes which are stunningly created to make it seem like Alaska or Washington State are a pleasure to the eye. The actors are heart throbs too. Even the simple story line encourages mind evading, which is relaxing.

Second, I keep returning to understand the formula of success. Why are these movies attracting such a large teenage audience? I walked into a cinema house in Geneva with the same teenagers that swim with me at the public pool. This Abercrombie generation actually applauded and laughed and sighed at love scenes. I would have thought it would be a "girlie" movie but the guys tag along for the fight shots. Manifestly, they enjoyed the show!

Twilight isn't a light movie. It is well thought, like a Harry Potter for older kids. Its special effects may look like improved Bionic Woman and Million Dollar Man but there is fun in that. Other cinematographic references can be found: Adams family for the Halloween grunge look, West Side Story for the gang fights, Brokeback mountain for the landscapes and Gone With the Wind and Casablanca for the dramatic kisses.

The heroine Bella has natural beauty. She isn't too skinny and doesn't wear make up. She also rarely wears feminine clothing, always decked in thermal, checkered and corduroys. The second part guy is the muscular, tanned sportive fit that every adolescent girl would drive to, however its the pale lanky indifferently dressed guy that Belle loves. They have selected forest, mountain scapes as their surroundings, often covered with snow. As if a call to mountainous nature would be the coolest destination, more than sunny beaches or happening cities.

There is very little violence and no gore. Nothing in this movie is reminiscent of a horror movie. There is no scary episode. Barely any suspense. Many many love dialogues. The pictures are beautiful because the faces of the vampires are colored so their lips are pinker, their eyes entirely hazel and their skin paler than a geisha's.

I sign here below that I actually enjoy these movies very much. I wouldn't worry in the least about the teenagers who would grow cultish about it. Its harmless. So please don't take the fun out of it. Leave me there in the field of flowers to look at Edward the Vampire swoon over Bella and not once, ever, bite her!
Posted by PinkTaxiBlogger at 9:57 AM