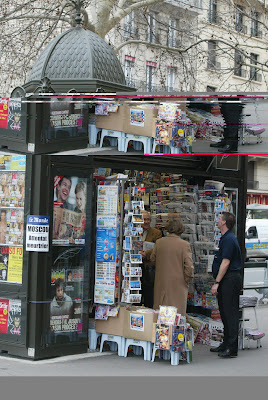 Never ever judge a book by its cover, or by its title!

I picked up Jean Rouaud's "Champs d'Honneur", with great hesitation, despite the laudatory  review given by Le Monde. The cover was a  photograph of a World War I soldier. I have never  truly enjoyed that period of history. Even the title was bellicose. However, when I realized it was a Prix Goncourt winner (1990), I forced myself to purchase it.

I ended up finishing the book in three days. Granted, it is summer. I had two days without FIFA and I read myself to sleep every night. I enjoyed the book tremendously. It actually hardly evokes WWI. It is a novel about a family. Not a romanticized saga, nor a boring autobiography.

The writer, whom I read about later, used to sell newspapers at a kiosque in Paris. He came from humble means but from an ambitious family that pushed him to get a degree in literary studies. However, he still ended up as a kiosque newspaper seller. Rouad wrote this book in the 1990s and received a Prix Goncourt for it, which made many journalists rush to his kiosque to meet him. He has since written a dozen of books.


In "Champs d'Honneurs", he writes about a series of passings in his family: his grandfather, his great aunt, his great uncle who died in WWI and his own father, whose death affected him the most but about which he wrote the least in this book ( apparently his other books developed those feelings further). All this sadness, in rainy Middle France (Loire), yethe also offers so much comic relief! His style reads like Marcel Pagnol, and his images from Louis de Funes movies.

He mentions his pious great aunt, a spinstress. It reminded me of my great aunt, Tillette, short for Henriette, who was born in  La Rochelle. She also became a spinstress. Perhaps because  so many men were out at war! She may have missed her opportunity, being at a marriagable age during the two World Wars. Her sister, my great grandmother, married an American Irish soldier who came in WWI to France to fight with the Allies. My great grandmother was an English language teacher so they could communicate. Both lived to be centenarians, and retired in Florida. Neither had lost their French accents despite living in the United States for 75 years!


I was most impressed by the pleasant style of the novel, characteristically French,  reminding me of a succulently rich French dish. It is considered to be contemporary French literature. I have earned one point, dear sister, in a theory that I  have always wholeheartedly embraced: the French can still write post Sartre.
Posted by PinkTaxiBlogger at 5:57 PM