The Way I Teach 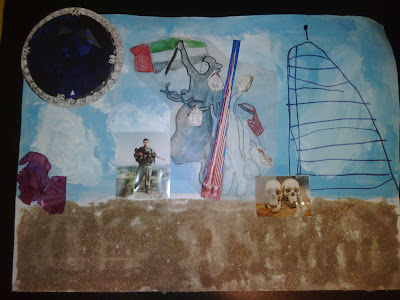 Some people are born scientific and others artistic. Some have a business acumen or an athletic bend. I am convinced that I was born to teach. I even earned a degree to teach but was often labelled as overqualified to teach in some institutions, or stumbled over bureaucratic issues and university politics when I attempted to teach at the American University of Sharjah.


From very early on, I channeled that academic zeal onto my siblings: every summer we prepared for the following academic year by filling up Passport notebooks, the French  equivalent of summer bridge notebooks. One of my siblings was always enthusiastic, the other ran to his favorite hiding place (a box in the storage room) and the third once threw a chair at me in rage while we practiced for the SAT verbal. I also helped write college entrance essays with them, and I spoon fed novels to the less enthusiastic readers of the bunch. I gladly tutored for the brevet and baccalaureat exams. My mother had trained me to tutor my younger siblings from early on, especially that after a certain point, my French had become better than hers.


As a newly wed, when my husband was looking for a French teacher that would facilitate his integration in Geneva, I told him to look no further. No sooner would he untie his tie that I opened the large French textbook. He invariably fell asleep on the couch as I coached him but there was no escaping me. As we walked in the city and, as though he were a toddler learning speech for the first time, I would point to umbrellas, swans, trees, motercycles, sailboats, coats, buildings and he had to repeat the words to me in French.


When I had children, I transferred my energy and hopes onto them. My eldest son  has done the most mileage with me. He is occasionally enthusiastic, often tries to hide from me, and has yet to throw a chair at me, but that is because we probably haven't reached the SAT reviews yet. Beyond his normal school curriculum, I also choose to home school him with a French program by correspondence, religiously submitted  bimonthly, with all the required exams approved by the French government.  In all honesty, we do this for him to get a Swiss nationality, because he is technically supposed to be home schooled in Geneva, and we need to show proof of the latter.

For me, the most challenging thing to teach in this program by correspondence are, ironically (given my love for art!), the "art and music appreciation" sections. To fulfill those credits, we listened to jazz, counted musical scores, and were attentive to opera voices, all while driving around to activities.  We are always brainstorming for art project ideas, and the above picture is an example of one such project:  in this assignment, we had to transform a well known painting of our choice. My son chose "Liberte Guidant le Peuple" by Delacroix, for which he replaced the gun with our infamous Burj Khalifa, glued some authentic desert sand and put a hijab on the Marianne who, in his project, carries an Emirati flag. A gem shines in the sky.


I love to teach because somehow along the way, I learn myself. I stumble over a almost forgotten physics concept, work a mathematical axiom and shed tears for a poem. I try to make amends for my own educational loopholes. With my children, I relearn the intricacies of French history, understand Jean Jacques Rousseau better and practice the art of handwriting. Indeed, in order to teach you have to understand the concept yourself.