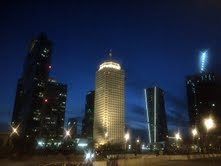 It just clicked. One day I wasn't a runner, the next day I became one. Just like that.


It takes a push. And much trial and error. It takes bottled up energy and the desire to express it.

I wanted to row indoors. My sister encouraged me to run outdoors instead. My son made me an awesome play list. I made a realistic decision to run 3k. Set up my ipod for the distance.

I had to inform the world. Tweet my intention. I departed for a 3k. It sounded impossible. But it was twilight. I had example singing on a loop. BurjKhalifa as a target destination. I would try. Simply try to run.

I had attempted running during the summer. I had followed my sister on Mediterranean trails and roads. I had managed hills and admired seascapes. But I ran with difficulty, I measured my pain, I stumbled on my breathing. 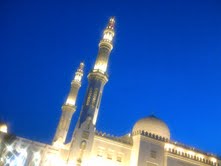 And then it happened. I considered 10k on a simple thought. I leapt through Zabeel neighbourhood, the once reluctant cardio practitioner I had been. I didn't think of my breathing, it came naturally. I didn't want to stop. I wanted to run past palaces and gardens, flower beds and after peacocks. I ran through twilight in search of cityscapes and found an over-pass, on which I took a halt for a photo op!

Empty, royal Zabeel stood still, if not for the few cars to the right with their cigarette-red lights. The roads leading me to the horizon, and to the periphery attracting me like a moth, the illuminated mosque. All under skies of twilight clouds. A delicate street light prepared to turn on.

Flywheel, the indoor cycling activity built my cardio stamina and contributed to my steam. Trained for strength at Evolve and mentally stimulated by the Inner Fight philosophy provided me with the self confidence needed to run the distance. Music and the surrounding wonders gave me spring.

I reached the finish line that Snow Patrol sings about, and I now feel, according to the tune, that this is where I would begin. Running. 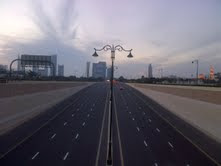 Posted by PinkTaxiBlogger at 11:47 AM 31 comments: