The Swiss Way of Thinking 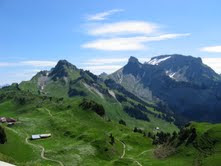 In this entry, I will indulge in generalizations. This is a non-PC forum, so I will permit myself this freedom. Inasmuch as I have already generalized and romanticized about the French ad nauseum on this blog, as a true francophile, I will move on to the Swiss, who have been historically misunderstood. I hope I will shatter those stereotypes we have of the Swiss in this entry.


Throughout all my years as a student in Geneva, followed by my first years of marriage there and of course my summers "en famille", I have been in indirect contact with Swiss people. The same way you can live in your foreign cocoon in the United Arab Emirates, you can do the same in Switzerland and only have few relations with the citizens of the country.

Geneva is a cosmopolitan city. The international organizations, corporations and finance industry have attracted a large international community. I use the outdated term "international" purposefully instead of "global" as everything is a bit retro in Switzerland, and the international community behave as though they still existed in another decade. The expats of Geneva behave as though they were here on short term, not immersing themselves into the Swiss culture but rather only spending time with one another. For a start, they send their children to "international" schools, their kids not interacting with other Swiss who attend the excellent public schools. There is one exception to that rule. The Spanish and especially Portuguese workforce have truly integrated into the Swiss lifestyle. My support for the Portuguese soccer team during the World Cup stems from my contact with them in Geneva.

Perhaps the expatriate community is intimidated by the Swiss. It is true that the Swiss are conservative. They issue from a Calvinist work ethic reflected into their perfectionist reliability. To purchase an item " Made in Switzerland" carries as much cachet as anything made in France or in Germany, if not more . In order to produce perfection and precision, they sacrifice some romance and creativity, but it is usually worth it.

The Swiss continue to produce top design, a certain state of the art production. They also have an artistic community, but it is small. I can therefore only think of three great Swiss artists of reknown: Hodler, Paul Klee and Giacometti, the latter appearing on the Swiss 100 bills.

I visited MAMCO, the modern and contemporary art museum of Geneva that has received good press for its curator's choices . I wasn't impressed in the least (or I just don't get it). First it should only be called Contemporary because it doesn't have any modern artists. More precisely, it should be called Emerging Art museum because the only reknown Contemporary art I saw was Christo (and a unique piece that made the visit worthwhile: his plan to wrap the Jet d'Eau of Geneva in 1976!) The rest were long corridors replete with small framed works that were hung very closely together, almost like animation. Designed for the viewer to walk by and throw a quick glance that would give a certain impression....perhaps the future of art, more piecemeal, fleeting, like blog writing, more spontaneous.
The MAMCO's attitude towards art is full of humour, definitely rebellious. It appears as a reflection of the Swiss younger generation. Every Swiss person goes through a necessary rebellious phase. It happens when they are adolescents or young adults.

In LeMonde (22 June 2010), I found an article that informed me more about the permissive policy towards drug addicts in Switzerland. Like in most societies, a fringe of the youth are addicts; in Switzerland, they are more apparent. The dealers propose their wares in parks and the addicts have a safe haven in Geneva, behind the train station where they can snort, inject or smoke the drugs under medical surveillance. They are supplied new needles and other tools and are sent to emergency rooms in case of an overdose. This policy has lowered the incidence of AIDS, accidents and crime. Addicts are not sermoned, only supervised.

The majority of the Swiss youth dress grunge: they wear Palestinian kafiyas and Castro berets. They pierce various parts of their bodies and wear dreadlocks. My little kids attend a Sesame Street type of music camp in the summer. Their counselors, eat organic, wear dreadlocks and/or are pierced and tattooed.

Like in most Western democracies, they organize around social causes and indulge in Gay parades. They are master graffiti artists. And no matter how quiet Switzerland can be on the majority of nights, when they rave they do it with a vengeance, as they do every Lake Parade, right in front of our windows! They are infamous for squating in abandoned houses, modern kibbutzim, with inner laws of cohabitation.

Then they grow up. They calm down, straighten their collars and return to their conservative quiet lives. Their last expression of liberalism ends on their bachelor and bachelorette party when the bride and groom walk separately around town with their gang of friends, all adorned in costumes and tricks. The next day, they are adults. 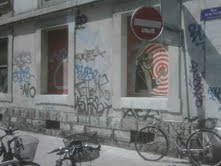 Posted by PinkTaxiBlogger at 2:44 PM