Saad Mohseni in the New Yorker 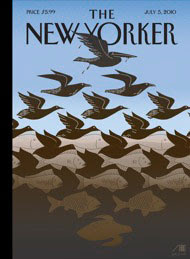 Le Monde is what the Economist recently called "the bible of the French intelligentsia"  and Saad Mohseni has already been interviewed in it many times. I  proudly save each article for him. However, the honors are greater when he is featured in a large piece in the New Yorker. That magazine is literally the cream of the crop!

I will add a single remark to this small introduction, because I cannot compete with a New Yorker journalist. My ten year old predicted this. When my son was asked to play journalists for a school project, he chose to interview his dad's very close friend Saad. I had the opportunity to witness the interview: the interaction between the two was dynamic, the questions answered in Saad's particular style of turning questions  back on to you. My son had done the work of a New Yorker reporter without knowing it! Saad is a true role model.

Here is the link to the piece: