To travel with Le Monde (In the Footsteps of Clotilde Reiss) 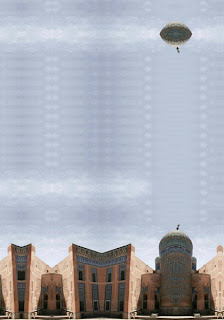 It was April 1998. While reading Le Monde before a siesta, I jump out of bed and rush to my parents's bedroom, who I was visiting in Dubai from Boston.

- "Will you, oh will you sponsor this trip?"

I was brandishing Le Monde and had folded it to reveal my discovery.

A trip to the Islamic Republic of Iran!

I had not been back since 1979 and was left with sepia memories and recent academic collectibles throughout my Masters degree. Moreover I had studied the Farsi language (which before I only had an ear for) for two full intensive years in university and could now write a letter or memorize Saadi and Hafez!

My parents were more than supportive and even sent my elder brother with me. We would travel in May (just two months before I got married in Salt Lake City) accompanied by ...... a dream come true: the actual journalists of Le Monde.

We boarded a chartered plane into Tehran, exclusively accompanied by fanatical readers like myself (my brother feared it was a cult when he saw so many identical opened newspapers on the plane). We traveled with this French group for a week, bus rides, internal flights.

We revisited Tehran the Islamic but most important Tehran the political (met parliamentarians, influential women in politics, university professors).  The doors of the imperial Pahlavi palace in Niaravan, once forbidden, were open wide, exhibiting a strangely bourgeois home (and not a palace), with its drawers open, its furniture upset (had the inhabitants suddenly?) asthough someone a thief had broken in. We were the guests at the French Embassy with its fantastic "salle des mirroirs" (but done in the Persian fashion, like Monir Farmanfarmayan's art work). I thus know today where Clotilde Reiss, the French hostage remained under house arrest at the embassy.

We were driven to Qom to visit the shrine of Khomeiny and to meet Ayatollah Shirazi (today deceased), an experience I had only read about in The Mantle of the Prophet (Roy Mottahedeh) and in Among the Believers (VS Naipul).

In Shiraz, we visited the tomb of Hafez, the Persian gardens of Ferdowsi, the remains of Persepolis and the university that once was American and that had been started by my grandfather, Dr. AbuTorab Mehra (I later made a summary for him, to tell him his works survives). Shiraz the city of childhood of my mother! The cradle of Iranian history.
Magically, last was Isphahan, its blue domed mosques, its bazaar replete with antiquities, its own Puente Vecchio. The Florence of the Middle East, the cultural center of Iran (and perhaps the region).

We traveled with chain smoking Mona Naim, the Lebanese journalist whose French was frencher than the French.  I was star struck, surprisingly shy and didn't interact or stalk her much. Later, after the trip, I could put a face behind the reportages on Iran and Saudi Arabia.

Today I score Le Monde, very very carefully, for another trip. One with a unique destination like Iran: ( I had wanted Iraq of Saddam),Central Asia, Libya, Jerusalem or wouldn't discovering Afghanistan for the first time with my favorite French journalists be the best introduction?
Posted by PinkTaxiBlogger at 6:27 AM