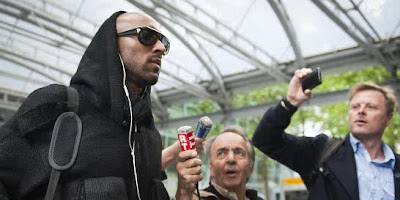 In the wake of its disapointing loss in the World Cup 210, my brother and I feel the need to reassert our support for the French soccer team.  My brother has added some remarks to this entry, but we essentially shared the same views throughout these games.

My eldest son didn't cry tuesday when France was defeated by South Africa. We both had wiped some tears already when they lost against Mexico. He didn't call for "La France" in his sleep as he had when they drew against Uruguay. We were both standing by the screen, almost there on the bench with Thierry Henry, cheering our heroes until the last minute. My brother sat with us during the three games, wearing his vintage Coq Sportif jersey. My youngest son ran around wearing a hand me down Zidane jersey that had belonged to his brother six years ago.When you support a team, you support them through thick and thin, is what we believed throughout the games. Even if  they lose. You recognize their failures, you acknowledge the odds against them and you hold steady. Where is the passion and loyalty otherwise? France reflected their dreams and aspirations on the French team,  and what they got was a reality check: a miror image of themselves.

In the posting "Can I just have one month of cable please?", I attempted to convey the emotional attachment I've had to "Les Bleus" since 1998. While I stick to that memorable year of my marriage, I believe in the recommendation that has been given to the team: "Tuez la mere" (kill the mother) which means they must find a new game, let go of the Oedipus complex and move on from the victorious Zidane. Innovate. That recipe won't work again. The sports commentators should stop referring to '98. Most players on the team are new and did not play in '98.

Take Frank Ribery for example. Example is chosen because we have encountered him twice personally in Dubai, when he trains here with Bayern Munich. My son asked him: "Why do you play with a German team? He simply answered "because they need my help". That same Ribery kindly posed for pictures with my two sons, on two separate occasions, a year apart,  and told my eldest son: "Of course I remember you. Weren't you at X location last year?" Ribery didn't disapoint this World Cup either. He ran up and down the flank, lonely, with no partner to share the ball with, till finally Domenech allowed Henry to join the field.

What the French team did this World Cup was that they colored the sport with drama and tales. Locker room conversations, strikes and personality clashes shone in the headlines.  Perhaps the players inherited that rebelliousness from Zidane. They won't submit passively to bureaucratic authority. The rest of the world calls them "banlieusards" referring to the residential projects they grew up in. What is wrong with that? Their origins, like the favelas of Brazilian players or the gecekondus of Turkish players, gave them their aura. Where did we expect them to come from, private academies?

Therefore, when they are in the locker rooms and faced with head on rigid stubbornness from above, they rebel and they curse like any adult would. I am not questioning the fact that Anelka was suspended after the insult and I am not defending the team for striking in his support (even though we have to grant them team spirit for doing so, when all speak of selfishness and individualism). I can't help but admire their "culot" or nerve. Perhaps pride describes best Anelka's sentiment , as we see him walk out of Domenech's gordian knot, in this photo, head high, with the same stride as Muhammad Ali!‎​​

I love heroes in defeat. Their vulnerability makes them human.
Posted by PinkTaxiBlogger at 6:05 PM