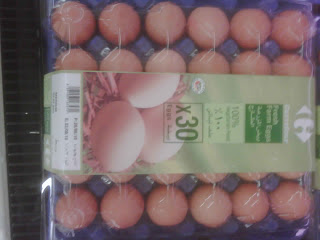 I buy them by the dozen, eat them three by three, daily and now for eight grueling weeks. Brown, preferably organic.

Hard, soft, scrambled, omelet, sometimes fried w a dash of zaatar, never with toast, or bread. Always a green (broccoli, spinach, asparagus) on the side.

My grandfather, a physician, used to scrutinize my eyes (the way doctors did in the 1950s) and send me straight to the kitchen to eat eggs to cure my anemia. (And this when I used to be 40 pounds overweight).

It's like eating clouds, fluffy omelets, melty boiled ones. No sooner have I finished my breakfast that my stomach growls at starbucks, begging for a Nutrigrain, a think thin bar, a special K or those naughty cookies I used to sneak into my handbag. Now only a couple of dates will sweeten my tall skinny cappuccino to go.

However these eggs do fuel sufficient energy to roll like an egg (I mean ball) in pilates, or squeeze into an egg shaped posture at bikram, or climb a set of 45 stairs (sometimes two) or bench press 15 kgs.

Because the diet flows into a detested yucky protein shake, followed by a large array of poultry, fish or meat, reminiscent of a paloelithic lifestyle. Not a grain of rice nor a strand of spaghetti. I can only pluck fruits before 6pm and grow veggies in my apartment.

My eight weeks are ending and with it the cultish following of the diet. The protein feast is coming to an end. I am not sure I can stomach lasagna for a while though. Didn't I just leave a cave? But I could fast forward to the XVIII century when Marie Antoinette had chocolate squares and macarons (watch my 5 year old daughter's favorite movie Marie Antoinette by Sophia Copolla).
Posted by PinkTaxiBlogger at 5:43 PM