Can we just have one month of cable please? 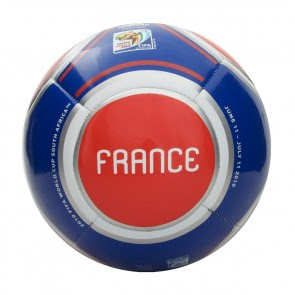 "This team has the possibility to get over this obstacle with this match. Everything can change for them." Zinedine Zidane (at a News Conference yesterday discussing the upcoming match between France and South Africa on Tuesday)

I have had soccer fever my entire married life which has now been a good 12 years.


Let's rewind to World Cup 1998. I was in the USA then, preparing for my own wedding, with a six hour time zone. I was still  living alone at the time and thus fell into the soccer mania by myself. However, it was on the large screen at my grandfather's house in Sandy, Utah, that the whole family, reunited days before my wedding, watched the final between Brazil and France, half of us cheering for Ronaldo and the other half (I amongst them of course) shedding tears at  Zinedine Zidane's victorious game! I even mentioned him incidentally in my wedding speech.

I was in Geneva for the World Cup 2002, where we  participated with the entire small city and watched games on the large screens set up for the occasion in parks. Our son, a toddler then, would run around with a ball. The matches were held in the afternoon, in daylight because they were played in Japan.

By the time it was World Cup 2006,we had settled into a life in Dubai. Our LG plasma TV crashed one day in the middle of a game. We ran to the store that night in haste, purchasing a new flat screen (a Sony this time),  and luckily for us it happened to coincide with the Dubai shopping festival. As a side note, we don't have cable. We don't watch TV at home. We only owned a handful of educational dvds for the kids at the time (Sound of Music, Baby Einstein). Mostly, we were trying to set a good example for our kids so they choose to play, do sports or read instead. But for the World Cup, we decided to treat ourselves. We purchased the box, the cable, and all the bells and whistles.

That same summer, I was set to deliver my third child in Geneva, and so I spent the remaining world cup days with my six year old, who was decked from head to toe (golden soccer shoes included) in Zidane attire, watching matches. The French team with our favorite players Zidane, Ribery and Henry made it to the finals.....and we witnessed the final minutes with Zidane performing his historical head butt. We have since not forgiven the Italian team for their bullying.


We have now reached WorldCup 2010, and our four year old son isn't called Zinedine as some of us had wanted, but the soccer fever lives, with particular support to France. I have allowed my 6th grader to watch all the matches, even the late night ones. I tell him that in 4 years he won't have that opportunityto do so, preparing for his official Brevet exams.... But somehow the baccalaureat exams will be for 2017 so he has lucked out.....

PS. "La France a perdu une bataille! Mais la France n'a pas perdu la guerre!" I think General deGaulle's citation is applicable to the French football conundrum today. I wish the Bleus all the best of luck for tuesday. I hope the Mexico-Uruguay game will have a winner too, so the points can even out for our beloved Blue team. It is simply too early for the French to go home. Nicolas Sarkozy, have you given your two cents (or rather centimes) yet to Raymond Domenech?
Posted by PinkTaxiBlogger at 12:38 PM