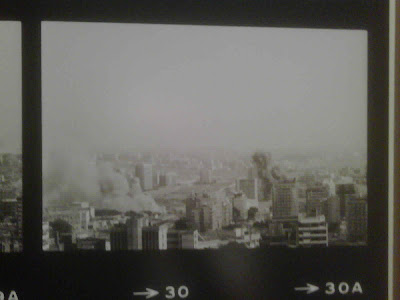 A poem by Rashad Serhan

This is the photograph of a news reel, by the artist Fouad Khoury. I bought it on a whim. It hangs in a corridor where my eyes meet it daily. During my childhood, my eyes witnessed the same news reel.

In the 1980s, I grew up watching the news of bombardments in Beyrouth from afar. The news was often in Arabic and the names of  neighborhoods like Daamour and Ramlat Al Bayda still resonate in my mind. Most particularily, I remember the TV screen in Beyrouth itself, with my grandmother, Teta Um Hani, watching attentively, quietly, routinely. Her dinner would be set on a wooden trolley (like a restaurant one, on wheels). The trolley was laden with the simple mezzes she liked for dinner, some labneh, sliced cucumbers and tomatoes, and grilled halloumi cheese. Or she could be seen knitting away, asking me to come sit close to her. Telling me: "Shoofi ya Teta!"(Look oh grand ma!).

And always the same images of bombing on the television.

I bought that photo because I still remember the humming of the radio, following those visuals on the TV, and the familiar sound of the news on the radio that my grandmother listened to in bed before falling asleep. She kept it on a very low volume so as not to disturb her grand daughter who was visiting from Dubai and sharing the room with her.
Posted by PinkTaxiBlogger at 11:14 AM