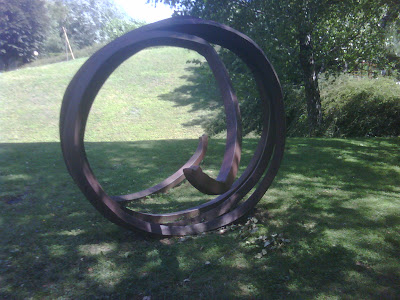 
I walked into an art gallery, not far from the Promenade des Anglais, in Nice, one day. I entered a new world, one that resembled the grand Musee de Nice, because all the artists (except for Yves Klein) that were represented there were from the Ecole de Nice (Cesar, Arman, Ben, Sosno, Venet and the youngest of them Moya). And everything was for sale!

A mustashoed man greeted us. Jean Ferrero, the owner of the gallery, is a character! As a photographer, he had encountered Picasso, Leger and Yves Klein in the glorious days of the French Riviera. As a gallerist, he knew all the Ecole de Nice, the late Cesar and his accompanying mistresses, Arman (whom I"d encountered there once) and the rest. Moya, a skinny bespectacled young man used to paint at the gallery, his self portraits in caricature Pinnochio figures. His works were left to dry on an Arman table.

The gallery was a a true Ali Baba cavern, the canvases resting against each other against the walls, or even against a Cesar sculpture. There wasn't a  piece of wall that wasn't covered with the witty play on words by Ben, the successions of paintbrushes, or tubes of paint by Arman,  or the square heads of Sosno.

He later gave away management to a gentleman who dusted up the place, sent Moya to a proper studio and properly curated shows. However, I miss the Ferrero epoch, when I could, on a lucky day, purchase a painting or sculpture at a great deal.


I didn't meet Bernar Venet at Ferrero's gallery. I was introduced to him at Art Dubai. The kind artist gave me his email address and that was when our correspondence began in 2008. I had admired his work two decades before I  had met him. The first sculptures I saw of Venet were monumental ones. A huge single steel arch, almost 180o, in a park in Nice. Another one facing the Nice public library. And in Cap Ferrat, on our walks, I found one in a garden once, and ever since, peer over the walls to steal a glance of its Infinite arc. We also managed to buy our own, a series of arcs, which I lovingly call a bouquet!

I rejoice in finding the scattered Venet's in the world: in Geneva I have found two, and in Beyrouth there is one also. I use the pictures I send to Venet as a pretext to keep in touch. I write to him in French. He invariably answers me in English. I even sent him a photo of the Dubai metro station in construction, its carcass resembling a Venet. These pictures amuse him.

Last summer, my husband and youngest child went on an excursion, in the back areas of Saint Tropez to visit him. A garden of sculptures, a steel bridge made by him over a stream, a hangar-atelier, and an old mill transformed into his private residence with his personal collection of modern art: his colleagues and him had traded, gifted etc. Very charming, not pretentious in the least, Venet was our guide. Promenade with Venet. An art lover's dream.
Posted by PinkTaxiBlogger at 1:06 PM