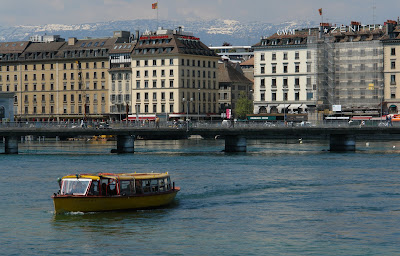 When we lived in Geneva, we didn't own a car. We lived in the heart of the city. Like New Yorkers, we walked everywhere. Babies in strollers, toddlers on sccoters,  no car seats to worry about.

When we rented a car (for a  skiing  outing or cross European trips), we were always worrying  about the parking, whether it was feeding the meter or moving the car. Car owners in Geneva have to park in centralized areas and walk to their cars anyway.

So we take the bus most everywhere. Taking a bus in Geneva is a truly Swiss experience. Like the newspapers that are stocked in open boxes with small areas for coin dropping, it's all  based on the honor code, and pride in Swiss citzenry. Occasionally, you will get a  surprise check , when all the doors of the bus lock, and inspectors ask everybody to show their tickets. If you get caught not having purchased a ticket you receive a hefty fine and  are publicly embarassed. That is enough of a deterrence for most Genevois. I will admit to have jumped on a tram tickteless a few times  in my entire public transport experience (which began in 1985), but I have luckily never been caught red handed. During my summer stays in Geneva, I take the bus daily and so I have chosen to purchase a monthly membership. My son pays a symbolic 20 swiss francs a year to accompany me and the small ones are still free.

I use the bus to commute to my children's activities. Sometimes, my kids are spread out on both banks of the Lake. My son  takes sailing lessons in Cologny and his siblings are in an art and music day camp in Petit Sacconex, in two opposite parts of Geneva. On any given day, you can see me zoom through my connections, my whole route synchronized to the second. Often a sprint up a hill would close the commute. The buses in Geneva are always reliable and on time. Schedules are posted and respected. Most of the time, the bus conductor is indulgent and will wait for me a few seconds as I run up to his door, stroller in hand.

My eldest son went through a phase when he aspired to become a bus driver and so he would run to the conductor and ask him to press the central open and close button. When he grew out of that stage, he found the free newspapers on the bus that he would read aloud, enumerating football scores or weather forecasts, reminding us to bring our umbrellas for those rainy days. Bus rides are very quiet and solemn moments in Switzerland and his reading would wake us all up and annoy the elderly.


The special part of public transport in Geneva is that it includes some trains and also the water taxis, known as "mouettes", that circumnavigate the bay. My children have  even acquired aspirations to become sailors because they have taken them since a very early age. All this is a nice respite from Shaykh Zayed Road traffic....
Posted by PinkTaxiBlogger at 6:06 PM