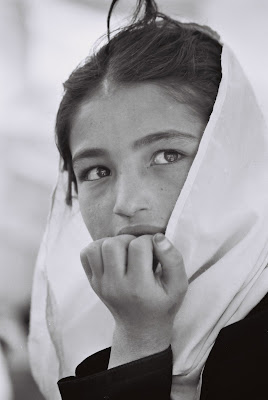 I have been accused of Orientalism, many times. Its because I have always lived in an aseptic area far from all the exotic places I belong to. I have been shunned by some members of my Lebanese family for having fled the civil war to live in a desert (Dubai). I have had the luxury of peering towards Iran from this side of the Persian Gulf and commenting on pre or post revolutionary politics. I have been accused of lodging in an academic ivory tower, theorizing rather than actually feeling the qualms of my region. But most important, I have been asked many many times whether I have been to Afghanistan where my husband works.

This has not happened yet, but will in good time.

I fell in love, married an Afghan and have 3 Afghan children. When asked where they are from my children say Kabul. Nothing else. Its as simple as that. Their mom could be a mixture of 4 origins (ok, more) but they are Afghan. It provides them with pride, to belong. In an Orientalist way. I admit. We eat Indian curries at home, so it doesn't come from the cuisine. They take farsi lessons, so that is a start. They practice their religion, which is an integral part of Afghan culture. No, we don't listen to Ahmad Zaher (famed Afghan singer, the Um Kulthoum of the country)!

Their father, who has never worn a kemiz shelwar ( neither one of us believes that the robe makes the national! "L'habit ne fait pas le moine"), provides our kids with enough Afghan paternal love and explanations. Our annual visits to the Bay area (California) to visit our paternal side of the family also offers the children with large exposure to Afghan family lifestyle (albeit quite Americanized).

"Where is baba?"  they ask. "Kabul", I answer. But they also know that baba always is attending meetings at Emirates Towers. I asked my daughter one day to point to Dubai landmarks and call their names; we reached Emirates Towers and she said: Kabul! The symbol couldn't be more evident of what Kabul represents for all of us.

However they have seen the pictures, the art, the literature and another sort of music. In Geneva, our apartment is wallpapered (not literally) with a large collection of Roland and Sabrina Michaud photos, showcasing the Afghanistan of hay day, circa 1960s. Its simplicity, pastoralism,its breathtaking landscapes.

In Dubai, we have photographs of Afghan refugees in 1999 walking in the snow, of bricklayers, the buddha-less holes of Bamyan, all taken by the Afghan photojournalist, Zalmai. Also, in our Dubai home,hangs the girl with the green eyes of Steve Mc Curry (National Geographic), the icon of Afghanistan. Our own Marianne.

Since Khaled Husseini's books and film are not advisable for kids, I have stored copies for them to read later, as I have Atiq Rahimi's work. They have met Atiq, Zalmai, Saad Mohseni the Afghan media producer (Sundance prize), they know that Afghans are gifted and artistic.

Wasn't Mirwais, our youngest child named after Madonna's DJ who mixes the coolest techno vibes and is francophone too?

In my children's bedrooms, I have hung a number of artistic photographs. Inedits (can't find the english word). Their uncle Talal, the lebanese, went to Afghanistan and captured the essence of their homeland. He took pictures of Afghan people and especially Afghan children. They cross the streets of Kabul through a flight of birds and cars, or buy fruit from a stall between two burka wearing women, or attend school. Talal Salaam's best evocation of that country, and his personal chef d'oeuvre, is a black and white portrait of a school girl, in class, her beautiful face craving knowledge, for a split second meeting the lens of the intruding photographer. (If you look very closely, in her pupil, is the reflection of my talented brother).

Afghanistan is in my children's hearts. Its their home culture. They are creating it to be their own Afghanistan. An identity that provides them with belonging and pride 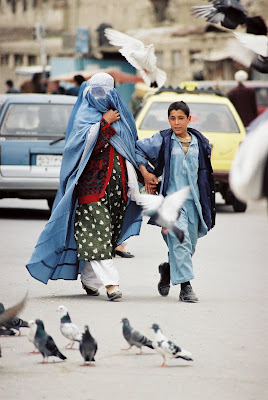 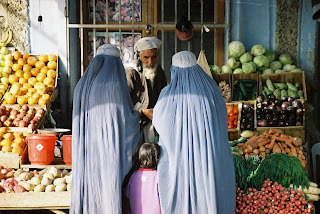 Posted by PinkTaxiBlogger at 4:54 PM