A page in history 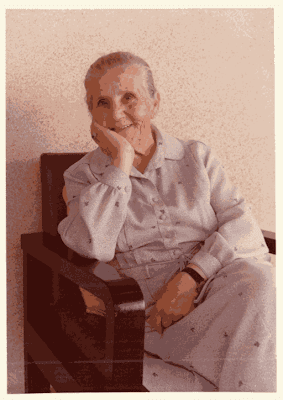 I am not a direct descendant of Anbara Salaam, but I  like to think I have inherited her philosophy. She was a fleeting person in my  life, but I have precise memories of her. I believe I have been an indirect recipient of her close relationship with her nephew, my father. The picture above is a portrait taken by my father.

Anbara Salaam Khalidi was my father's aunt on both sides. She was his paternal aunt who later married his maternal uncle. She married  my grandmother's brother Ahmad Khalidi, at the late age of 30, a true act of love, and one of bravery for a woman born in the late 19th century.  But she had been even braver by refusing to wear the veil at the early age of 20.

She took it off for the first time in public during a demonstration. She battled for the progress of her gender. This explains my strong stance towards the veil. I cannot regress in history, I must always remind my daughter that her great great aunt was one of the first Lebanese to shed the veil. In my opinion, there are many ways to express one's religious zeal, besides vestimentary ones that impede modern activity.

Anbara Salaam was also a very educated and literary woman. This was the generation of Simone de Beauvoir, Marguerite Duras and Yourcenar. These were women who had the confidence to write and verbalize their thoughts. Anbara was their counterpart in Lebanon. She used to correspond with Gibran Khalil Gibran, author of the Prophet. She had literary salons and translated the Odyssey and the Illiad into Arabic.

Albert Hourani, who wrote one of the most book influential books in Middle Eastern Studies: "The History of the Arab People", evokes the importance of Anbara Salaam Khalidi in Lebanese society. The book is a concise and beautifully written account of Arab history from pre-Islamic days uptil the 1970s. His approach to history is subaltern, meaning that history is about the people and not about the rulers. He researches the daily life, atmosphere, social, cultural and economic backgrounds that give all the important historical dates, depth and meaning. If you turn to the chapter entitled "The Age of European Empires, you  will find an entire paragraph dedicated to my aunt. In the words of Hourani, her life "conveys some idea of the foment of change." He credits her with "playing her own part in the emancipation of Arab women." Her story covers only three quarters of a page in a large volume but I am nevertheless eternally proud to live in her shadow.
Posted by PinkTaxiBlogger at 5:36 PM