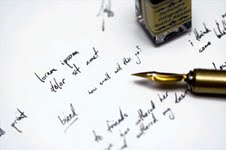 I have imagined writers at their desk, scribbling away. Typing. Composing. I have fantasized about Jonathan Franzen choosing his words, assembling his ideas, ending the Corrections. I have feared the frenzy of Salman Rushdie as he woke in the middle of the night to "throw up" a gem of a book: Midnight's Children. I have smiled at Jhumpa Lahiri's elegant composure as she described her community.

I am an avid reader and I connect with some writers more than others. I get acquainted, become familiar and then the passion kicks in. I know them well and imagine them at work. Writing.

I write. Daily. But where does my writing fit? Neither journalistic nor literary, it remains in a purgatory of an unknown category, in limbo. Is it really "graffiti with punctuation?" When will I leap away into the category of a novel? I have made a statement, on this blog: I would never write a novel. I take it back today.

Perhaps I discourage myself for fear of writing a "bad novel". A poor novel. What would I write about? An idea has crept into my mind recently and this idea is germinating. I wrote 5 chapters one morning and deleted them that night.

"From the top of the first page, till the end of the last page" sings Chris Martin about a novel, or about the story of an experience, in general. Perhaps, I am not as expansive in my expression as a novelist must be. I remain an essayist, gathering my opinions and feelings in free-association blog posts, that eventually gather up as a whole, no matter how disparate the thoughts.

I have now composed a beginning of a "noveletta", a vignette of a novel. Nine chapters relating a single narrative, a single voice, a single perspective. Only the chronology is mixed.  I am skeptical about my attempt. An essay of a novel, without wanting to spell an oxymoron. The etymology of "essay" is the French essayer, "to try". With courage, I had to "try" to write my novel.

My novel today doesn't have a title. It remains open ended too. I am living my novel, not just writing it. That is its basic story. Perhaps I will erase this second trial again, the way I have the first trial. But I know today that the novel is within me: the story and the essence.

Last year, I called my sister, very upset and panicked: "I lost three essays that I was planning to submit to the blog, can you please look them up on the email, retrieve them somehow?" We couldn't find them. Indeed, they were lost. My sister reassured me wisely:
"They are in your head. Write them again".

I can confirm. My novel is in my heart today.  I just have to write it.

Posted by PinkTaxiBlogger at 2:52 AM