Turned Into A Top40 Fan

I spent three decades in complete snobby rejection of top40 music. I used to pride in listening to alternative music only, except for Madonna ofcourse, the queen of pop!

REM, U2, Depeche Mode, the Cure, PetShopBoys were at the core of my musical taste. I rejected all the teenage bop songs, didn't even dance to them: lambada and macarena? Yuk! Even George Michael didn't pass my test. I hate 80s music till this day and only have vague memories of the 90s: was it Snap? Ok, there was Everything but the Girl, Oasis and PM Dawn.

As a pinktaxi, given the nature of my occupation, I listen to the radio more than anyone else.

The first admission was with Bruno Mars and Eminem song that makes my heart flutter even though it is a rap song. I had just crossed the threshold with my taste for Top40.

Then my sister started corrupting me in a bad way, taking advantage of my newly receptive behavior: she would whisper about Lilly Allen's "its five o'clock in the morning....." and the British singer's distinct accent sung over an American rapper's made for stunning contrast.

I would have blushed in embarrassment before admitting to liking Kate Perry. I rejected her with certainty at first songs. Then came TGIF with its Palo Alto by Franco, ambiance. The lyrics caught me. I daydreamed of Farhadian's pink flamingos in the pool.

And my brother, the music expert, gave me a pat on the back, in semi approval: "well she did make it on the Vanity Fair cover!" Kate Perry's latest song "We against the world" was an immediate love at first tune. I crank it up when it plays. It lifts my spirits and I giggle at the fact that I like teenage music. I am the one that points it out to my kids.

No wonder I was so excited about seeing Breaking Dawn from the Twilight Saga. Vamps are cool and I cannot miss out on trends. Besides I break dawn frequently myself...... 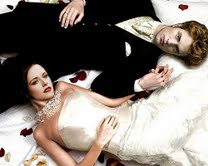 Posted by PinkTaxiBlogger at 1:36 PM