Why don't you stop the violin lessons? 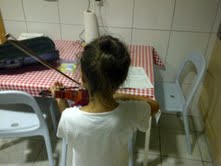 I had an only child: he almost took 100% of my time. He was 18 months old and he was a big boy, he appeared double his age and he had double energy. I found a Polish teacher to teach him the violin.

My son could barely talk not to mention read notes! I rented the smallest violin from a stringed-instrument maker (otherwise known as luthier in French) in Geneva. We eventually upgraded to larger and larger sizes, as did his sister and brother. Ofcourse, violin playing became our own family tradition.

Why the violin with its initial squeeky sounds? Because it has a more an intuitive method of learning than the piano. Because the Japanese Suzuki method is "music made easy". Because ColdPlay introduced violins in VivaLaVida.

My son's Polish teacher was replaced by a Jewish American teacher, then by an Armenian teacher: all of them from communities that celebrate the violin as an instrument they can carry in their diasporic flight. Today, Palestinians produce world famous violin virtuosos.

Today my children practice with an easy going American teacher. They play the violin like others go to arts and crafts classes: casually. I am never behind them to practice ritually. I encourage them to play with pleasure. To touch upon music lightly.

The children probably only spend a maximum time of 45 mins a week playing their violin, scattered moments of music around the house. But it is during those 45 mins that they look at a music sheet, that they hold a fragile instrument.

Music matters and this is an introduction. 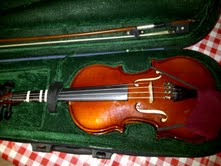