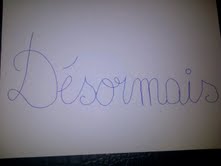 I have collected three adverbs in the last three weeks. I have caught them in my vocabulary net, as they "flew" by me.

The first word landed gently on my blackberry screen one early morning as I touched it with the tip of my fingers. It is a French adverb, a savant one, because it is only employed in written language. It is an antiquated adverb, used as seldom as "seldom" is used in English. The adverb "desormais" ( from now on) came to compliment another savant word, one that I had selected myself: "palmeraie" (palm garden). I savored the taste of an old adverb, I called it mine. I pronounced it all day, all week, all month.

In the same vein, when I exchanged a few words with my son's first grade teacher, as we frequently do at drop off, he used an adverb that may sound technical in English but caught my attention with the latin-charm of a Marsaillais accent: "systematiquement".


In pilates, in search of imagery and to qualify the movement of the cat, the instructor used the adverb: languorously. I liked its latin etymology. In an English context, it sounds savant.

This fascination with words occurs frequently, especially when I am reading le Monde. In fact, in that case, it is the expressions that fascinate me, the twisted syntax that makes it such an erudite paper.

But the collection of words, simple ones like the adverbs I have stolen from these 3 individuals, is well expressed by the tender Marcel Pagnol when speaking of his childhood:

"I had the passion for words; in secret, on a little notebook, I collected them, like others stamps. [...] And I repeated them often when I was alone, for the pleasure of hearing them."

Posted by PinkTaxiBlogger at 3:07 PM