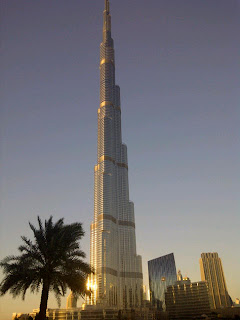 I walked out of the Mercato movie theater and I imagined I still was on the set of Mission Impossible 4, starring Tom Cruise and Burj Khalifa. The tallest building in the world was glittering in our back yard.

In my opinion, those are the only two cool items in a somewhat jumbled, scrambled movie, with too much action and too much speed. Where was the suspense? 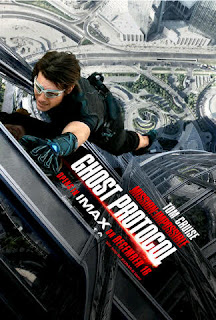 How I missed Tom Cruise! I haven't seen him in a good movie in a while! He oozes self confidence. He's got the biceps for that, the smashing green eyes and the sharp features. But he has put on some weight....
As for the Burj Khalifa, it looked splendid, sleek and sexy. The views were incredible, the stunts were awsome. It filled me with pride that our Burj had become a movie star! 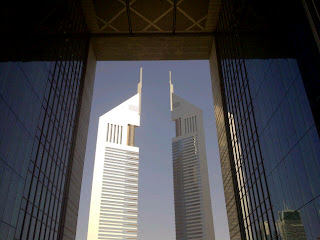 Of course I screamed with excitement when they showed the scene I had waited 18 months for: Tom Cruise running underneath the arch of DIFC. I had just told the story of how I had seen the shot being filmed when they cordoned access behind our building for the shooting. From the 43rd floor I had seen Tom (the size of a peanut) run as the extras were orchestrated to move as he traversed the DIFC run. Then the cars on the all too familiar DIFC round about, that were literally "parked" in total stillness, began to move like a merry-go-round that resumes its turns.


How strange to see the effort of many takes and the suspension of activity in my neighborhood for half a day last only split seconds on film!

It was worth watching Mission Impossible 4 because of the scenes in photogenic Dubai! Tomorrow morning,  I will rush to its esplanade, to see the rising sun reflect in its shimmering glass. The esplanade that I frequently visit, alone or on coffee dates. 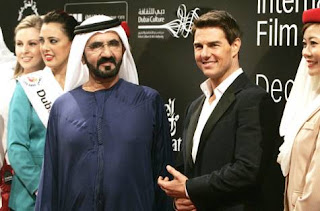 Posted by PinkTaxiBlogger at 9:16 PM