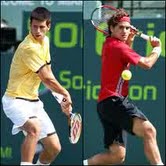 If I were on Facebook, which I luckily and wisely am not, I would join the Federer fan club, which comprises mostly of guys born between 1945 and 1978. My sons, born 2000 and 2006 are mere exceptions. But then again, they listen to Depeche Mode!

These sons frequently quiz their friends: which tennis player do you prefer? The brave venture a Nadal, which is "second tier" in our family and the less brave just say Federer for fear of reprisal. None would venture to say Djokovitch because they have realized that the player is overly-proud, bordering on vanity. He may perform technically but his behavior on court is akin to DarkVader, or at best he really should be a soccer player on the Serbian team! 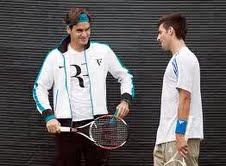 Please recall that our home is cable-free and on such milestone sports events, I seek refuge at family homes. My hospitable cousin fed me a t-bone steak, followed by a sharp espresso and left me with my uncle, her husband and my son to watch the match. I was with the guys and communicated with others via blackberry messenger. My son fell asleep in his "Roger That" Tshirt of encouragement and cheer.

I must give credit to a young lady that does, exceptionally, follow Federer with the same glee as me. She used to be my neighbor and I have watched one such match on her cable with my offspring. We have always commented, shouted with joy on the good points and lamented the bad ones. All with smily faces on blackberry messenger!

My cousin's husband, my host, and my less than indulgent uncle, watched me navigate the blackberry system, chatting with my brother in Jordan (he has watched RF matches with me live), an RF fan at sea in Europe (who could sense the ambiance in NY by mere messenger comments), another RF fan, over enthusiastic and frequently hilarious. For up close and personal information, my friend in NY, at the stadium, in the perfect seat (I caught a glimpse of him a few times on TV). There also was a different type of tennis fan, pinging me, and he was from the other camp! (Can that be?) He was adamant about the victory of Dark Vader! How could he?

The game was long, carrying into 5 sets. It started as a very close game in the first two sets, degenerated for two sets and the last set, was like a clean slate: it was the match-set! The bbm messages flew as fast as the balls, some funny, very few technical, some degenerated into hilarious and only LOL could express what I was doing despite the defeat.

Roger, we will be there for your next grand slam. Is that Australia? We hope you will play in Dubai again. Till then, we must watch the final: Nadal, go get him! I never said you were second tier. 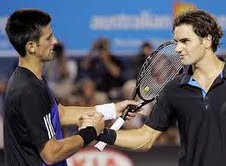 Posted by PinkTaxiBlogger at 5:33 AM