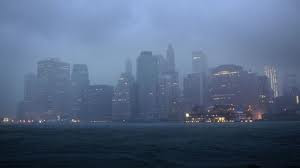 The Swiss A340 landed at JFK after a smooth 8 hours flight without a bump or a hitch. Having taken an early flight,we landed shortly after noon.The lady at the border immigration was cheerful and welcoming, then she whispered: the NY airports will be closed for the weekend, a first complete shut down ever, even with heavy snow storms. Basically, we had landed shortly before the eye of Hurricane Irene was to pummel NYC, expecting to make its landfall on the Northeast  US by Saturday.

The weather outside felt normal, and we drove into Manhattan where we checked into the hotel and called my daughter,who like others was in panic mode, about where to take refuge and how much food and water to stock.Stores had been depleted, batteries became extinct , and candles popular .
I opened my TV in the early morning at 4 am, enjoying my jet lag, to see Mayor Bloomberg surrounded by his lieutenants announcing the closure of all metro and public transportation, again a first in the history of the Big Apple. I looked at my wife and wondered what good timing it was for us to witness Manhattan floating into the Atlantic. 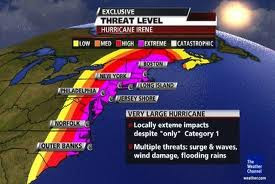 I went out to Fifth Ave to walk my jet lag away, and found it deserted as though a curfew had been announced in the City.The few passersby were hurrying home carrying more supplies. I was relieved we were staying at an old hotel that can take hurricane battering, and felt safe that we would have backup electricity and ample supplies. I suggested to my daughter and her family to take refuge with us at the hotel. Her scientist father in law suggested to her to take refuge in Allentown,Penn,which was not within the realm of the hurricane. It started feeling like Noah's Arc ,especially that all the TV stations had nothing else to announce but news and updates about Irene.

Irene hit the Carolinas first,and started approaching Manhattan by midnight.The City was divided into different zones,the most dangerous being Wall St at the tip of the island. It felt symbolic, as though the US economy and the Dollar needed this imagery of drowning in the flood. I went into a deep sleep, unable to witness history anymore, especially that my jet lag was getting heavier.
I woke  up Sunday  mornign to some heavy rain, and the good news that Irene, like any female would , had changed it's mind and decided to go West, sparing Manhattan from danger.
Having said all that,it does not mean that the Hurricane did not create havoc and destruction in other areas of New England.The area was declared a federal disaster by Obama who certainly did not need another Tea Party with Irene. Many say Mayor Bloomberg exaggerated his reaction to Irene, but many had blamed him for not being ready for the snow storm of December 2010! So, in the end, he was better safe than sorry.... 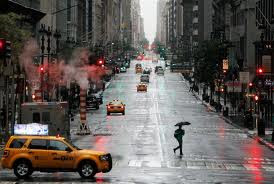 Posted by PinkTaxiBlogger at 9:51 AM