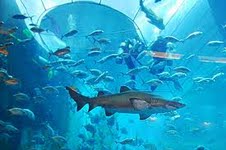 I have never had a pet, except for fish, for a few months. Why I got interested into aquariums, I don't really remember. In the 90s, I went to Sharper Image (does anyone remember that store?) and bought the slick, circular type aquarium that I set on the wall to wall carpet in my home in Boston. I could lay down on the floor and stare at my fish while I studied.

I bought a dozen and called them P.M Dawn, REM, Depeche Mode. I had to change the water, make sure the filter was working, buy them fish food. The cohabitation was successful. For a semester. Then I traveled for a week. And I thought the fish would survive if I left them with a lot of food floating on the top of the water surface. When I got back home, I was confronted with the laws of the sea: the big fish eat the little fish!

There was a single fish left: I think it was Amr Diab! He was swimming his monotonous circular movements around the tank with fish carcasses left at the bottom. I took a net, caught him and decided to give him a Guantanamo punishment (in 1992, before Guantanamo existed). This consisted of putting the net in and out of the water, in and out, in and out.....till I flushed him down into the sewers of Boston. He was guilty of mass murder!

I didn't want to hear about aquariums till the largest, vastest ones came to us in Dubai. At Atlantis and then at Dubai Mall. Those aquariums fascinate me. I never pass by them without stopping, without looking at the fish, the sting rays and the sharks. I had seen divers and I assumed they were marine specialists, managing the tank: cleaning it, feeding the fish and the sharks. So that the big fish don't eat the small ones and the same fiasco that occurred in my tiny Boston tank, happen in glitzy Dubai. Well, I am one of those divers tomorrow and I paid for the experience. 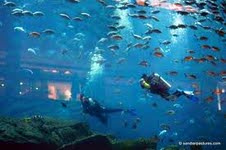 Dubai has three gimmicks: one of them is you can ski indoors, the other is that you can swim with the dolphins, the third is that you can dive with the sharks. Most people, if at all, stop at the first two. My younger brother has pushed himself, and me in tow! Happy our uncle, who is nothing less than Indiana Jones, is coming with us too. If he thinks this is a thrill, then I am in for a big surprise.

My brother's dare didn't surprise me. He had once given me a Bill Clinton smile and offered: "after we get our diving license, we could dive into the Dubai Mall tank." I laughed the idea out because at the time, I was still practicing in a pool so the prospect was very far. 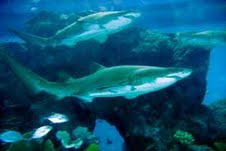 Some thirty years later, I am jumping into a shark tank because my children will be watching and because I am a blogger. My fear is inferior to the desire to overcome it for my kids sake. So they don't have shark nightmares.

When I told my cousin I was diving with 20 sharks, he replied: "make sure not to scare them!"

One thing is for sure, next time Camille LaCourt swims at Fort Boyard, I could be part of his team. 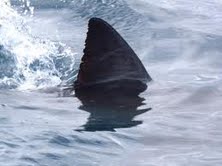 Posted by PinkTaxiBlogger at 12:03 AM