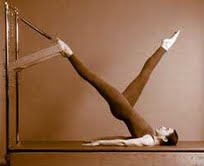 I don't go to a pilates class with the same demeanor as when I go to the gym to pump iron. In fact, my approach to pilates has changed my approach to all sports, be it golf or gym activities. I listen carefully and I maintain good posture.

In fact attending pilates class is a quasi academic experience. That is because I practice it at Club Stretch which teaches Classical Pilates, following the Boulder, Colorado program. I would even venture to say that the program is followed in an Orthodox fashion, with its very strict rules: we respect the choreography to the minute detail.

Who says Orthodox, doesn't say rigid and unchangeable. I have modified the Elephant position, probably 3 times in the course of my six year study. We have gone through different phases on the mat, initially starting with standard yoga like stretches in 2004 that I have not repeated since in the pilates studio. Instead, we go straight into the repertoire. The repertoire, is without a doubt, as classic as it gets!

I never cease to question the mysterious attraction, turned into passion, that lures me into the studio three to four times a week, year after year after year. I do not have the scientific inclination to retain anatomical terms nor to comprehend the laws of physics (both required in the studio). I have never had the grace or the understanding of choreography known to dancers.

Always and constantly, I am made aware of those unknown dimensions, with precision and poetry. I have just to glance at my fellow pilates practicionners who perform extraordinary movements and at a cadence I am impressed with. Meanwhile no other than I gives a surprised look. I think I will always be impressed by the milieu I landed in, somehow or another, six years ago.

Its comforting to think that I could join any professional pilates studio in the world and fit right in, because I am a graduate (in the loose sense of the term) of Club Stretch in Dubai. The same applies to Bikram yoga, which is taught there. I was in Santa Barbara, CA, when I told my husband: "stop the car, there is a Bikram studio!" But then I thought: "it wouldn't nearly be as fun as Bikram in Dubai!"

Posted by PinkTaxiBlogger at 9:18 AM