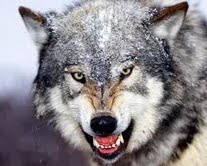 Djokovic met Nadal five times and each time Nadal lost. Same happened with Federer,all break up on the Serb's rock. In all games the public booes Novak  and the stern player doesn't care. The proof remains in the pudding.
I watched the US Open final at the beginning of the second set. It seems the first was an easy breeze for the Serb wolf. The Spaniard looked nervous and committed one mistake after the other. There goes the second set.
In the third set the Spanish Bull lost his confidence entirely and subsequently. lost his service,allowing the Serb wolf to hold him from his jugular. The American TV commentator said: it is a sick feeling in your stomach to face a player like Novak hitting balls that can't be returned. It is definitely a problem of confidence with Rafa,especially that Novak was playing "beyond believable".
As the sun sets on the Arthur Ash stadium and the third set comes to an end: 6-2,6-4,5-5 with Nadal serving;Rafa gives up and awaits the end with the invincible Serb serving to victory. Yet Novak looses his serve and the exhausted gladiators (after 3 and a 1/2 hrs  go for a tiebreak.)And the bewildered and disappointed crowd get their surprise: Rafa gets his 3rd set and go to the 4th.
In the 4th set Novak gets a back ache,asks for pain killers,and gets a massage from his trainer. Tension mounted,McNroe questioned the long medical time out from his TV commentary seat.
The 4th set break played again to Novak's advantage,sailing through to 3-0!then Novak wins his last set 6-1 to give him his first US Open win.
Over and out to you Dubai after 4 strenuous nerve wrecking hours. Fell on the ground as healthy as ever he faked that health break.

Posted by PinkTaxiBlogger at 12:46 AM