"Do you know how to say rhinoceros in Arabic?" I quizzed a friend, the way I have quizzed others in Arabic for obscure animals like bat or ladybird. We all know the zoological vocabulary for having reviewed them in kindergarten (and as the famed book, whose author spoke at my commencement,  "All I ever learned I Learned it in Kindergarten"). But I did my kindergarten in French!

My son has memorized the word for crocodile, for peacock, for desert gazelle and for shark in arabic from Hadanati, his Arabic kindergarten. They spoke to him in classical arabic there, thus erasing any colloquial particularisms from a variety of teachers from all over the Arab world, in favor of pan-Arab and classical approach to the, I must say, difficult language.

They recommended I append his education at home with more Arabic and I looked at my Afghan child and thought it preferable for him to speak and understand the Arabic of all Arabs, rather then pick my weak Lebanese. Weak classical Arabic would be better than weak Lebanese I thought.

And so we have learned the language together as we have now respected our linguistic pledge to speak Arabic together, despite the amusement and bewilderment of the majority. Here is an anecdote that conveys the attention we receive in public: 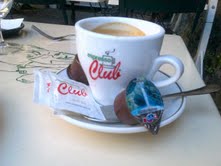 I sat at our favorite cafe Auer, in Geneva, with my youngest. The other kids were busy with activities. I prepared him before we got there with the preliminaries: mama would get her coffee, as she wasn't fasting on that day. I had a cereal bar and a bottle of water in my bag for him. We would sit quietly and talk for 5 minutes.

I don't remember what we talked about. But I was all his. My blackberry was in my bag. I got my coffee. I opened the small creme capsule that comes on the side and poured it in the cup. I think I poured all the contents of the 2g capsule. My son gave me a bite of his cereal bar. We chatted. I remember he was reading the signs in front of him, asking me why we pronounce the t of CAFETERIA but not that of CHOCOLATS.

A man was seated on his own, drinking his coffee. He was in his 60s and looked like M.Dupont in Tintin. Moustache and balding head. He was dressed in a jacket and pants.

It was then that my son touched the cream capsule, which flew by accident. It landed on the moustachoed man's lapel. I saw three drops of cream. I was shocked and paid all my excuses and in French asked my son to do the same, while I looked in my bag for a clean tissue to offer him. It wiped off easily.

The man was stern. He said:
"Alamti al walad al lugha wa laken lam tou'alimouhou al adab" (you taught the boy the language, but not the manners)

The man frowned more.
At which I told him: zaraltoni! Kanat ghaltah! Wa hatha fi shahr ramadan. Ayna karamat alarab? Fakartouka Faransi lianaka ghathban! (You disappoint me. It was a mistake. Where is Arab kindness? And this in the month of Ramadan. I thought you were French because you are angry.)

But even he was shocked by my son's Arabic!

Posted by PinkTaxiBlogger at 1:37 PM