Playing Golf with a Junior 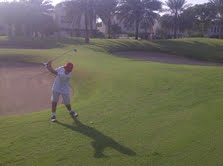 It has been 10 days since my son has become a Junior member at the Dubai Creek Club and we have both have the "new recruit" fervor. Not only must I drive the golf buggy as he is too young to drive it, but I get my share of guest and summer discounts!

September temperatures remain unpleasant in Dubai, but neither one of us cares, as my son is a golf fanatic and I am a Bikram Yoga junkie. Yet it was him who wondered why I was wiping my face: "I thought it was good for you to sweat, that it cools you down and no need to wipe!" he paraphrased a yoga instructor I know too well.

The single reason I started golf was to accompany my son in his game and practice. He has a year more of experience and his level is tenfolds better than mine. Playing with him on the large courses, partnering with him in small competitions and even acting as his caddie or plain supporter, has stretched the limits of my patience to the extreme! 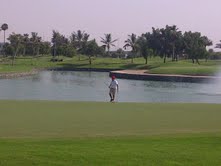 But I have to admit, his behavior on the course has improved a lot. At first, and this more due to his competitive edge than to his lack of maturity, he used to cheat: count his points wrong, or ask to play another ball. He used to use the T on the fairway! He also ignored etiquette, played ahead of the other unfortunate players who played with us, walked onto their putting line.....and the list goes on.

One very bad habit he had was to prize each and every golf ball. It was inadmissible for him to loose a ball and if he did he would score for it and put me to the task as well! That has changed this year and we have lost our "lake balls" by the bagfull now, but have gained in time!

He still doesn't rake after his ball falls into bunkers, which happens less frequently on courses he plays regularly. He begs for me not to count the ball that falls into the water hazard and he doesn't stand still when its my turn to play!

But those idiosynchracies aside, he does "transition" well to save time, because the game must be "choreographied" to be played in good timing. He selects his next club, takes his putter out ahead of time. And all along, his constant enthusiasm.

And his constant tips. It is safe to say that it is a learning experience to play with MY junior! 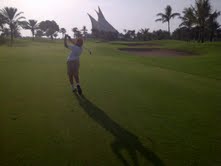 Posted by PinkTaxiBlogger at 11:12 PM