Does anyone remember the yellow binding of the National Geographic Magazine and the way relatives subscribed and collected them? They were rather small in format considering the fact that it was intended as a photography-magazine. Perhaps it wanted to contrast with Life Magazine, a generation preceding it, thinner but larger.

Either in Beyrouth, Dubai or Tehran, I had access to the National Geographic Magazine because my uncles or grandfather collected them. They encouraged us to leaf through it, and since there wasn't much distraction, I actually did. I think all my green images of the Amazon, the depths of Africa, the icebergs of the North Pole came from the NGM! 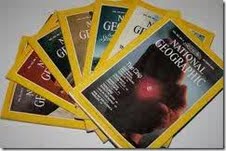 The Seventies passed and the NGM subscriptions became less and less in demand despite the constant prices. In the 80s, only my grandfather received it in Utah and they were always scattered in his medical office. I no longer looked at them: was it that I had grown up or had my priorities changed?

I will admit to a momentary lapse in intellectual reading: my father gifted me with a subscription of Paris Match for two or three years at boarding school. My girlfriends rushed to read my issues: always after me, lest they ruffle the pages of the weekly before I read them.  I loved the Diana and Stephanie sagas!

My life changed when I discovered Le Monde. I used to read the back issues at the libraries in university in the USA because each issue cost 5$. In Switzerland, my children learned very quickly to go to the newspaper kiosques and pick the issue for me, before they knew how to read, by simple font recognition.

LeMonde turned me into a media snob. I rejected the International Herald Tribune, not to mention La Tribune de Geneve or Khaleej Times! Now Vogue and Elle appeared futile and Vanity Fair turned into an occasional plane ride read.

I did go through the yuppy phase of subscribing to Travel and Leisure and actually read about the spas and hotels with serious interest. But I soon discovered it was all a marketing trap and I tossed the back issues into the recycling bin.

Today, seven years in the making, I have become a Canvas Magazine reader. I await each issue with the same trepidation I did the Paris Match, I study it with academic attention and I refer to it frequently. My children have seen the issues, they know I store them with care for easy reference and it has become the "National Geographic Magazine" of their era. Perhaps because our priorities have moved from the far flung rain forests and glacial deserts to the art studios and galleries of the Middle East.

Posted by PinkTaxiBlogger at 3:14 PM