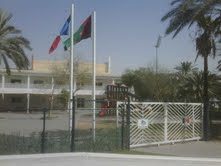 I received an article from the Economist by email. It was supposed to alarm me, frighten me, make me withdraw my children from the French school and drop them happily in any other, preferably Anglo Saxon, school.


However, it did not alarm me in the least. Yet, I didn't know that it was as a result of the debates after the publication of a book by a British journalist/professor, Peter Gumbel, who lives in France and had sent his children to a French school. "On acheve bien les ecoliers" staunchly criticizes the French system for many reasons amongst which the most important accusation: the way the students are harshly graded. I have read extracts of the book and I cannot disagree with its facts. The same applied to the article in the Economist.

"So?" All the points made are correct and I will not reconsider our educational choice based on points that are considered to be drawbacks by some, and not by myself.

My youngest had a very strict nursery teacher last year. I liked her and I think all her students, my son included, liked her too. She did frown a lot to get her message across. She did speak with her index lifted in a reprimand. My son considered her to be a challenge and not as an obstacle to his happiness. They would lock horns. He would frown back at her and would look her straight in the eyes. I can state now, with enough hindsight, that her strictness helped build his character.

I don't remember disliking any of my teachers because they were strict, or because they graded us with parcimony and never flattered our egos with star shaped stickers. I had to look "Awesome" up in the dictionary and still don't know a French translation for it. I know the antonym of "Awesome" in French and that is "Nul",  a word that the British journalist  often refers to himself. I don't know how to translate the word "Nul" in English, Anglo Saxons never use it to describe any student's work.

Indeed, the French teachers count mistakes rather than count correct answers. They deduct points rather than add points. I was used to that. I often got a catastrophic grade in spelling but that has made my French spelling today flawless. We can handle those grades. We get accustomed to them. But we learn from the mistakes that the instructors circle in red.

"Travail bacle". Most French students have received such a remark. It means that the work has been done in a hurry, without care. Such a remark, rarely mentioned in the Anglo Saxon system, requests that the student do his work with diligence and respect. There is a certain notion of perfection.

The French system maintains a formality that is a requirement for discipline and hard work. Teachers are not lax. They demand rigor. The work load is heavy and the expectations are set high.

I was not nervous when I changed systems at the higher education level. I could meet the challenges of the American universities because I had been under such pressure in school. Bad grades in college, which to be honest were few and far between, did not phase me. I learned from my mistakes.

I am one who has tried the American high school system in summer school. Certainly the summer programs must be lighter and less rigorous than the academic year, but I thought of the atmosphere as less competitive and less challenging.

I admire the academic nature of the French system. I agree that children should be introduced to complicated subjects such as calculus, statistics, philosophy, economics and more recently international relations at the high school level. I also believe children can be introduced to geometry and geography as early as grade 3. Moreover, at a very early age, two foreign languages are introduced to the child, giving him an opening to different cultures and idioms.

Teachers have systematically summoned me in the past about my older son. They say that he "is too much", that there is no room for his personality in the classroom, that he has to change to accommodate his classmates. These remarks about "cookie cutting" my child have not broken his confidence or personality. They have just toned him down by one crank.

Just today the eldest told me "I love my school". But in the back seat, my youngest replied: "I don't like school. I don't want to learn." Of course he said that in classical Arabic, making a "we don't need no education!" type of declaration.
Posted by PinkTaxiBlogger at 7:22 PM