Murakami at Versailles: Art in Juxtaposition 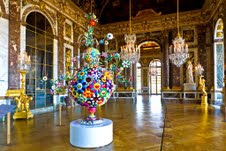 Takashi Murakami is being honored this Fall with an exhibit of his work at Versailles, as have Jeff Koons and Xavier Veilhan in the past, and as will Bernar Venet after him. Unlike those who  stand in opposition to this "manga" exhibit in the bosom of French Classicism, I believe that Versailles should be honored to receive such a talented contemporary artist.


All the men mentioned above are top tier contemporary artists. Two are French and two are foreign. They have decided, for these series of annual exhibitions that last a season, to alternate French and foreign artists, and that is understandable because Versailles is in France and the French government must encourage and celebrate its own talent.


However, those who believe in protection of French heritage protest those obstructive or even playful works of art in such a beautiful historical site.  I don't personally believe any of the mentioned artists are obstructive or even playful. They are each talented artists in their own right, who take pride in this golden opportunity
to exhibit in such a wonderful environment.


I have read Murakami's opening paragraphs to the exhibit. This written introduction, like the art that is exhibited itself, is an expression of his reverence to the historical and artistic symbols of Versailles. Most important, he mentions the enchanting effect of Versailles, the fact that it has inspired so many people and especially artists. For this rare opportunity in his career, he has created works of art that will remain forever, while the exhibition is only temporary.

This is what those who oppose this exhibit must keep in mind: this is an artistic event, and like Christo's art isntallations, it is only short lived. Christo always eventually unwraps his buildings and Murakami will pack his Manga statuettes. Versailles will be herself again for three seasons before Venet comes in with his gigantic steel structures in June of 2011.


Besides, who doesn't enjoy the justaposition of art against art? A Jeff Koons red pneumatic lobster hanging with the XVIIth century candelabras in the Hall of Mirrors is a perfect example. A Murakami Flower Monster statue staring at the painted ceilings of LeBrun with multitudes of colors and flowers would be fabulous. However, the negative press  that these art events received lead to a concession: no future artists would be able to exhibit in the palace, only in the gardens.

I would have dreamed to see Bernar Venet's Indefinite Arcs in the Salon of the "Roi Soleil"! The honors will be limited to the gardens of LeNotre. Have they forgotten that an older palace, Le Louvre has become a museum exhibiting art from prehistoric time till today? Have they forgotten that Francois Mitterand commissioned a Chinese-American architect, I.M.Pei, to build glass pyramids, anachronistic to the building in material and in shape? These same pyramids have inspired architecture worldwide: there are glass pyramids everywhere!

The opposition accuses Murakami of having "put lipstick on the Mona Lisa". What is wrong with that? Andy Warhol has painted her in sepia and multiplied her unique portrait. For the French who blame Warhol, their own Fernand Leger has miniaturized the Mona Lisa to a passport picture format and added keys to the painting. That is not a caricature. It is a way of appropriating Mona Lisa. Warhol and Leger are big enough to do that. Hasn't Yves Klein, their favorite XXth century artist taken the Victory of Samothrace and painted it acid blue because it is HIS color? 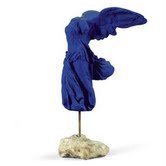 The Louvre, the Mona Lisa, the Victory of Samothrace and Versailles will survive the interference of other artists. The heritage of France is not endangered by the approach of other artists, those that will appropriate it by painting it differently, or by adding a stunning addition to it, wrapping it, or exhibiting their art in contrast to it. In fact the French patrimony will be examined longer, appreciated more, valued.

"Mettre en valeur" is a French expression that would get lost in translation. It is the perfect one to explain the effect Murakami's works have on Versailles.


The following are a few words by Murakami regarding his exhibit at Versailles:

"For a Japanese like me, the Château de Versailles is one of the greatest symbols of Western history. It is the emblem of an ambition for elegance, sophistication and art that most of us can only dream of. Of course, we are aware that the spark that set fire to the powder of the Revolution came directly from the centre of the building.

But, in many respects, everything is transmitted to us as a fantastic tale coming from a very distant kingdom. Just as French people can find it hard to recreate in their minds an accurate image of the Samurai period, the history of this palace has become diminished for us in reality. So it is probable that the Versailles of my imagination corresponds to an exaggeration and a transformation in my mind so that it has become a kind of
completely separate and unreal world. That is what I have tried to depict in this exhibition."

Posted by PinkTaxiBlogger at 7:34 PM