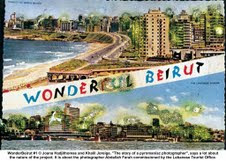 I only lived in Lebanon for 5 years and have rarely returned since. Barely once every 18 months. I always go with my parents. This time, I am going on a honeymoon with my husband. The last time we went there alone was eight years ago. I am going back with a conscious mission to reclaim my city.

I have always associated Beyrouth with war. My farthest memories are of conflict. I have battled with my identity and this identity crisis is quite common amongst the Lebanese diaspora. Many have nevertheless come to terms with these conflicted emotions, returning to Lebanon eventually: some have married  Lebanese, had Lebanese babies, cooked Lebanese food and spoken Lebanese dialect. I have had none of those experiences. I even have an Iranian mother and a close love for the UAE where I grew up, so my identity crisis continues.


When I go back to the authentic Beyrouth, I am faced with conflicting feelings: I seem to stand out. My mentality is different. I cannot speak or think as my compatriots. I escaped the war and  those of my generation who were not spared leave me with a lasting feeling of guilt.

I spent a the majority of my summer, last year, obsessed with the animated Israeli movie: "A Waltz with Basheer". I had the great opportunity to discuss it with a Lebanese film producer, Khalil Joreige, in Dubai at a Third Line event that exhibited the photographs he takes with his wife Joana Hadjithomas.

These photographs are appropriations of the 1960s postcards of Beyrouth when it used to be the Geneva of the Middle East. They have taken them and damaged them in the right places so that they appear as cityscapes torn by the war. They share my vision of a damaged past. The self-destruction evoked by deliberately burning these images could stand in as a symbol for the horrors of the Lebanese Civil War. I spoke to Jereige of the strong depictions of Beyrouth of 1982 in the Israeli movie. He agreed with me on the superb animation and accompanying music. We disagreed about the chronology in the film. I enjoyed our discussion.

Beyrouth belongs to Joereige and Hadjithomas and it belongs to me too, regardless of my opinions, or my cultural demeanor. Does belonging to a nation mean belonging to a monolithic culture? Not anymore. Why shouldn't Beyrouth be as multi-faceted as Paris or New York City, with its layers of society, its academics and its artists, its fascists and its revolutionaries.

Beyrouth, you are mine. My roots and history stem from there. 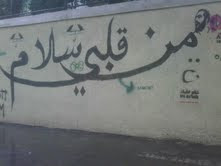 Posted by PinkTaxiBlogger at 4:38 PM