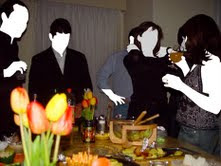 If you flip through the latest Sotheby's catalog of Arab and Iranian Art, you  may feel like you are diving into my blog! This isn't a compliment to Dalya Islam, the specialist of this auction, but certainly one for me, as I consider her to be a trendsetter. I am glad to discover that we agree on many artists.


She then places Lara Baladi and Farideh Lashaie on opposite pages. These two are my top feminist artists. She has noticed their dark overtones, as both pieces are quite dark. Baladi's collage of a multitude of female clubbers is an iconic piece of art.  In Lashaie's Wonderland, rabbits frolic and bounce, a landscampe in which her trademark brushtroke can immediately be recognized.

The Youssef Nabil photograph isn't a self portrait but rather a large image of the actress Ehsan. However, it isn't just another of his more "cliche" photos of her;  it is an interesting study with the actress counter balanced by the cinema lights and the sound system. This piece is given much attention with a lovely quote by the artist who says how he wishes to capture time.

Beware when you turn the page after Youssef Nabil, as a swarm of crows, captured by another favorite Abbas Kiarostami, may fly right at you, over the white snowy mountains of Iran. Owning that photograph would be similar to having a projection animation because these crows appear in constant and disturbed flight, uniting and separating till they take their last ordered flight. I can feel the winter chill and hear the loud croaks of the crows.


Reza Derakshani and Monir Farmanfarmaian are side by side in their white silvery splendor. Derakshani's fig tree is as geometric as the Untitled piece by Farmanfarmaian, whose arabesque of mirrors may also be tree branches in this work.

A unique painting is that of Jaffar Khalidi because it is dated 2008, when he used to paint very large edenesque landscapes. In this particular one, a Corbusier-like villa stands agaisnt a backdrop of mountains. But as you look closer, political symbols emerge:  you can decipher tents and human forms, perhaps displaced refugees.

Amongst the contemporaries who close this  collection, are my two favorites: the colorful squiggles of Koorosh Shishegaran, seemingly inspired by Roy Lichenstein: the color combinations are the same, the pop effect is the same, only that Shishegaran has squiggles, when Lichenstein adopted the pointillism manner.


Finally, the young Amirali Ghasemi photograph is a superb composition, and is a true conversation piece. Here, we discover a private scene of Iranian youth at a party. Their faces and naked arms are "whited out", making them look like store window mannequins, because they have removed their Islamic garb, and it would be safer for them to remain incognito. Yet we know they are Iranian from their surroundings. The lower part of the photograph is a dinner table and its color has a saffron stained undertone. The cocktail in the woman's hand is very visible, but  if you take a closer look at the table, you can see a bottle of Miranda soda. The tulips, which the Iranians and Turks have always admired since the Ottoman and Safavid eras, give the nature morte an additional edge.

These comments come with much enthusiasm but also with a dab of disappointment because I will always remember Dalya Islam's first "white catalog", the one with no art on the cover (October 2007). How can you select one lot over the other? I liked the  philosophy of that cover, for a which a French saying illustrates well: "les gouts et les couleurs ne se discutent pas" (we cannot debate people's tastes and choices of color). Furthermore, each and every piece had an expert comment, transforming the catalog into a reference book.

In 2007, the auction was named "Modern and Contemporary Art", and I  do prefer that heading to the simply "Contemporary Arab and Iranian Art" one, because today's collection certainly has a very rich modern collection composed of Egyptian, Lebanese, Syrian and Iranian Masters. In this commentary, I have left out those modern pieces of art, because I need not add a word to a classic Guiragossian, a nippon style Sepehri or the pensive street children of Louai Kayyali. Those pieces speak for themselves.
Posted by PinkTaxiBlogger at 5:40 PM