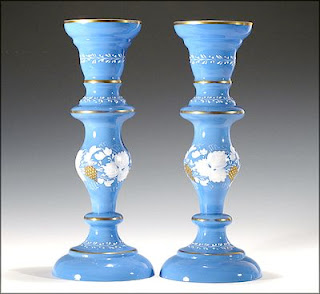 My sister teased me for a full summer. She said I would call my daughter Opaline one day. I had a one year old son then and had left him for the first time with my parents to travel.

My husband, sister, older brother and I met in Damascus for a week. During that trip, I was obsessed with the idea of finding some "opaline". Opaline is a French sounding noun for a certain glass that was used for glasses and wine carafes in Safavid Iran. How these antiques, produced in France for a Persian market, ended up in Syria is a mystery. With the help of my close friend, we found them, I bargained adamantly and walked out with a white one and a pistachio colored one.

How extraordinary, the global trade of antiques, anticipating  the globalization! Another antique that I particularly love is the "Morghi" porcelain plates and bowls. My mother collects them and so did my paternal great aunt, who was Lebanese. They are called Morghi because these early twentieth century made in China porcelains always have a chicken or two painted in the green background.

I hunted for Morghi in the Isfahan bazaar with my older brother and got a few pieces but it was in Geneva, in a carpet store that we discovered a treasure for a bargain. It was a very large Morghi bowl with a stamp, identifying it as a "zil it sultan", part of the dinnerware of the Sultan of Iran. The Swiss vendor didn't recognize its value and we bought it in a split second. How a porcelain made in China for the Persian king ended up in Geneva fascinates me!

My mother is my example. She has always understood the value and beauty of antiques. She has a rich collection of morghis, opalines and "zir khaki", pre-Islamic archaeological antiquities. I have grown surrounded by these treasures and only own debris in comparison to her.
Posted by PinkTaxiBlogger at 10:09 AM