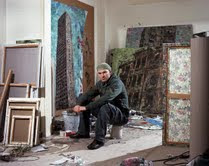 Vertical lines are their common outlook. Architecture is what they paint. They are both Lebanese. They are from two different generations.

I met Chaouki Chamoun this morning as he pointed to a 1987 abstract painting he had not seen since the collector who purchased it, had hung it in his dining room. He touched his work with his fingers and spoke of it like a long lost relative. I listened to him talk about collage and white paint and especially the vertical lines.


I looked at this earlier work and without being able to decipher it, I was privileged to ask him: is this blue the sea? He indicated that it was the sky. I inquired about his more recent works. His huge white mountains and especially his monumental cityscapes. They look like distorted bar graphs with illuminated windows. Tiny human figures accumulate in front, in order to give the buildings scale. These cities are the cities of the world, the cities of modernity. New York City most probably because he lived there. Perhaps Beyrouth, because he is Lebanese. But a Beyrouth of latter day optimism, before the incessant wars. The Beyrouth of the 1960s. 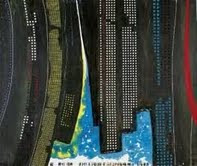 Today, I walked the city of my birth and I pointed out various buildings to my husband, the shelled out, delapidated skeletons that remain. "Look", I said "Ayman Baalbaki buildings!"  I was alluding to the buildings destroyed by war that Ayman Baalbaki paints. He paints them single on each canvas. Piece unique of a unique crumbling building. Dozens of these canvases, ranging in size, sometimes in diptych format, one canvas hung on top of the other, giving it further verticality.

When I discuss these paintings with my friends they say they couldn't live with the sight of a delapidated building. I question that because if they looked around them,  in Beyrouth, they would see dozens of those historical buildings, standing proofs of a past that was real, not an imagined nightmare. Perhaps also, a reminder for all Lebanese of the consequences of war.

I also tell them that the painter that has created them has painted them on fabric covered in flowers, resembling wallpaper or a tablecloth, and these flowers come through under layers of paint, an indication of the artist's romantic heart, his quasi-organic feel of the city. The harsh realities of these bombed out skeletons, the vestiges of war, are thus painted with a certain nostalgia. Ayman Baalbaki, born in 1975, was a war child. He paints what he knows intimately. 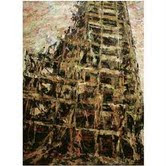 As we ended that day with a celebratory dinner, the illuminated bay of Jouniyeh in the background , I gazed upon the 1960s  house of the hostess, with its Eames lounge chairs and modern furniture , and imagined a time past, one of nonchalance and dolce vita and successful laissez faire economy. Here were two painters, actually present at the party, Baalbaki the younger and Chamoun, the older,  celebrating with a large gathering of designers, art collectors, writers and reporters. The music was hot and the night air was cool. I was dreaming of verticality. Of cityscapes. Of Beyrouth the artistic. 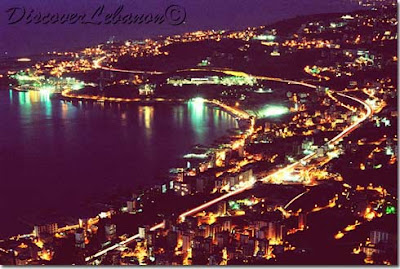