It was the summer of 1985. I was 14. Madonna starred as herself in a movie called "Desperately Seeking Susan" with Rosanna Arquette as Susan.

One of the most memorable scenes from the  movie is Madonna changing in the public bathroom and drying her under arms under the hand drier. She was thirty years old at the time, with heavy eye liner, a perm and a mesh black top revealing her bra. Indeed, it was Madonna who made visible bra straps fashionable.

Right around the same time, I discovered a store on M Street in Georgetown, Washington DC that was called Up Against The Wall. It had all the neo-punk accessories that appear tame  today in comparison to piercing and tattoo fashion current teens wear. I bought fluorescent green, yellow and black rubber bangles to wear by the dozen on each arm and I tied a black lace ribbon in my permed hair. I wore pink jeans with black paint spots on them. My parents turned a blind eye to my fashion statements, even to my nails polished or should I say painted, in different shades of neon pink, orange, yellow and pink. 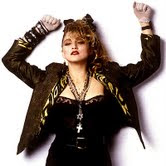 I made my entrance at a preppy boarding school in Geneva thus clad, emrbacing my desire to be set apart, to have my own style and opinions. I remember seeing "Desperately Seeking Susan" seven times. In the pre-DVD era, we had to go to the movies to see a film that many times. I cannot remember how I managed to do that considering I had watched the Maverick Tom Cruise in Top Gun perhaps 3 times as well.

Madonna was not a good actress. Even I knew that a year later from seeing "Shanghai Surprise" in which she starred with her then husband, Sean Penn. But in  "Desperately Seeking Susan", she acted as herself, chewing gum and dancing wild to Get Into the Groove. My siblings and parents tease me. They say I have retained those dance moves since 1985. All the teasing has led me to hate Eighties music and fashion. But when it comes to dancing, I can party all night, as long as the music is good. I have been spotted in the Maldives, in Istanbul and in Beyrouth! 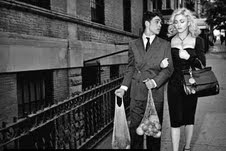 So listen to this and get into the groove!!!
http://www.youtube.com/watch?v=8KP0V4ypqTI
Posted by PinkTaxiBlogger at 5:56 PM