The Wonderful World of Toys

I was surprised by how much I enjoyed Toy Story 3. The movie left me with a fuzzy feeling of nostalgia. The toys felt real in so many ways. They come alive in the movie, and  each toy character is special in expanding a child's imagination during play, even those that are battery operated.

In Toy Story 3, the concept of play was well illustrated. The way children play with toys,  and pretend as is encouraged by educators for preschoolers, the  way they imagine the interaction between a Mr Potato Head and a dinosaur or a romance between a cowgirl and an astronaut (when the obvious would have been with Woody, the actual cowboy!) They pretend objects fly, they lend voices to their toys. The difference between toddlers who misuse their toys and older kids who treat them with care is also developed at length in the movie.

What I most enjoyed was the concept of what happens to those outgrown, lost or broken toys. When I gift my kids toys I choose them carefully. I want the toys to last, so they must be solid and well crafted. I also prefer toys that will captivate them for a long time, not toys that have instant and short term gratification. Many of the battery operated toys (especially the remote control cars and noisy electronic ones) are therefore rarely purchased, although sometimes they are received as gifts. I try to think of whether a toy will have the power to actually entertain and educate more than one child.
Sometimes, the less special toys do end up being given away for charity. My children also gladly offer their favorite toys to their cousins when they outgrow them. They give the puzzles and books to the cousin that enjoys reading and can spend hours putting pieces together. They have given their wooden toys to the baby cousin who is also their neighbor.

For a child, there can be a psychological block to handing down toys and parting with them. It is a difficult task to separate from beloved toys, but knowing that the toys are in "good hands", with children they love, makes it a lot easier and is a consolation.


In Toy Story 3,  I was very touched by the scene in which the grown boy gives his favorite toys to a neighbor. I was reminded of my daughter who recently "donated" her softest yellow stuffed lion, the one that had actually been bestowed as a gift to her baby brother whose astrological sign is Leo, but she'd made it her own. The lion followed her everywhere, was dressed in the most unfitting outfits and never spent a night away from her. However when she met her youngest cousin, she unexpectedly and spontaneously gave it to him.


By pure coincidence, this rainy morning I randomly chose a book from the forty library books we borrow weekly which happened to be Hans Christian Andersen's "The Tin Soldier"! As I read to my daughter this story that is also about toys, I realized how few things have changed over two hundred years. My daughter enjoyed the story. Her focus reminded me of  my sister, who used to grasp onto to every word I read stories to her by this same author,  especially when I added  extra drama to the narrative, the endings always so very sad. My daughter's eyes teared up, but I noticed she is a little tougher than my sister, whose tears used to spill from her eyes....or perhaps I have lost my touch! 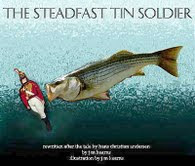 Posted by PinkTaxiBlogger at 11:00 AM