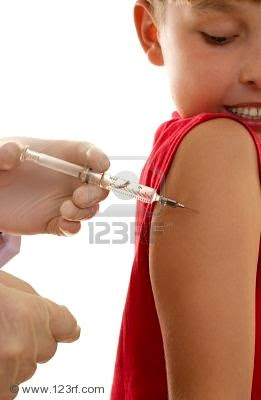 I was recently at my family's pediatrician's office in Geneva,  when I asked the doctor about the status of my three children's vaccinations.

My Swiss doctor is a pragmatic one, who believes, for example, that chicken pox vaccines are unecessary because chicken pox has become so mild nowadays. I can confirm this fact, as when my two older kids had it, I felt they got over it so quickly. In general, in Switzerland, the medical mentality is "less is more". They do not operate on lazy eyes, or dialated kidneys unless they have exhausted all non surgical options and supervised the progress for a few years. They are optimists: children illnesses often subside with time.


My mother on the other hand, has become more cautious as a grandmother than she ever was as a mother. Three of her kids were horse jumpers, and now she worries each time her grandchildren get on a horse! Her instinct may have been good,  as my  eldest son  was once rushed to the ER from the stables in Dubai. But it actually wasn't a riding accident. It was a football accident. He was kicking a ball  around with some new found friends (he  makes friends very easily like his father!) in his jodhpurs and boots.  In the midst of it all, he tripped and ran into the wide open steel window of a stable, ending up a few hours later, with many stitches on his head.

My initial fear was whether his tetanus vaccine was up to date.  A few weeks later I asked his pediatrician. She immediately reassured him that he was, but did mention that adults should  be the ones to worry about tetanus, as the booster needs to be administered every ten years. When was the last time you received your tetanus booster shot?

I certainly couldn't remember. I couldn't think of the last time I had received any vaccine, unlike my sister who lives in the US, and gives herself and her entire family the flu shot and the H1 N1 shot, and panicks as all Americans do. I told her the truth. Courageously I might admit, as we all have a family fear of injections, lasting from our mother. You couldn't give my mother a shot, even if you pinned her down. I remember my grandfather running after her with a vitamin B injection in hand, attempting to coax her into it. Eventually, he would catch her. But that's probably because he is her father.

My kids  watched with a certain feeling of satisfaction, as I pulled my sleeve up and she rubbed the alcohol on my arm and prepared the needle. I had three pairs of eyes assist their own doctor in the endeavor. I held my breath and pretended like I feared nothing. She is a good doctor and  it didn't hurt a bit. She did however mentioned I may experience some soreness at the site of the injection as a side effect.


That night, when I turned in my sleep and my vaccinated arm hit the pillow, I went down memory lane to the accurate date of my last  tetanus shot. Beyrouth, 1982. I received my vaccination and was wearing a blue sleeveless dress. I remember this so precisely because of a photograph my father took of me on that day. I am standing with the then Prime Minister of Lebanon,  Salim Al Hoss, for a souvenir pose. The elder bespectacled man put his arm around me and, as the snapshot was taken, the moment immortalized, I winced in pain because he has touched my tetanus vaccinated arm.
Posted by PinkTaxiBlogger at 8:39 PM