Contributing Post by Amira: Ramadan 2010 in NYC: a Lesson in Sprituality 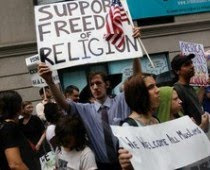 This morning, unlike my usually mundane mornings, as I was reading the NY Times and having breakfast with my family, I felt a sinking feeling in my stomach. My mornings are never truly relaxing, in the real sense of the term. I have my cappuccino with my husband, amidst the chatter of my kids and their cartoons, attempting to read my beloved newspaper, while still feeding them and tending to their needs. But for a mother of two, these busy moments are part of our reality, and so I have simply taught myself to remember where I've left off in an article.

My husband and I fight over pieces of the Times. Depending on who is foaming the milk for our cappuccinos, the other one steals the front page section of the NY Times. The Sports section is almost always strewn onto the floor, to be recycled, except during the World Cup,  the US Open, or maybe the Olympics, which warrants the reading of an article or two. My husband surrenders the Thursday and Sunday Styles to me, some of the more relaxing sections of the Times. We tend to fight over the Science section, every Tuesday, although it’s mostly riddled with anxiety giving information. The Real Estate section is naturally his to read first. In the ‘Dining In’ section, he hands over to me the recipes he would like me to cook for him, which I save in a little pile on the kitchen table. Once in a while I surprise him by cooking one of them for dinner. That’s how we spice things up in our marriage.

But today, and might I add, this week really, I scanned through the front page section and felt alarmed. I have to begin by admitting that I am not fasting this year and feel guilty about it. I didn’t feel capable of handling the grueling hours of fast, without a morsel of food or a drop of drink for such long hours. Summer days in the West are long, and life does not come to a halt as it does in most Muslim countries. I am also still nursing my youngest son, so I do have a valid excuse, but I am not even sure I would have fasted if I wasn’t nursing. That is to say, the act of fasting is an unbelievable feat of strong will. That my community manages to do so, wherever they are in the world , humbles me. I have fasted throughout my life, since puberty, even managing to slip in days here and there from the age of 9. The feeling of accomplishment is amazing. The feeling of peace within is even better. While fasting, your priorities change, your mood becomes solemn, your thoughts suddenly more pure. The tremendous sentiment of solidarity is overwhelming . And yes, when you walk past homeless and destitute people on the streets of NYC, who have no other choice but to starve, you truly understand their sorrow. Although I do not believe fasting is healthy, it is cleansing in both a spiritual and physical way, and by the end of the month, you feel better about yourself, albeit exhausted and drained.

The majority of my family fasts. My brothers have never missed a day of fast, whether for a law school exam or for a hectic day at the office. My sister is fasting in Geneva, from 5am until 9pm, with three little kids in tow and activities to run to all about town. I am immensely proud of them. The month of Ramadan is probably what I like best about my religion as it brings out the best in everybody. This year, being in NYC in the midst of the controversy of the mosque, I have felt embarrassed to have the physical appearance of a white American. I am blond with blue eyes, never categorized as an Arab, much less a Muslim.

And as I read through the NY Times this morning, I suddenly felt anxious, nervous, even uncomfortable. An innocent Muslim cab driver had been stabbed numerous times in the neck and face because, in what he believed was a friendly interaction with a customer, he admitted he was a practicing Muslim. I have often stepped into cabs and, seeing a Muslim name, felt compelled , in an act of solidarity, to ask them if they were fasting. I always leave them an extra tip, as these men work hard, navigating the crazy streets of New York, away from family, and since September 11th, (but let’s face it, since long before that day) in a city that doesn’t welcome them with open arms. And now I wonder, would I dare ask anybody again, without worrying that I am threatening them or humiliating them? Could a pudgy white racist man have altered my relationship with my community because I could be likened to him?

This terrible incident wouldn’t be so frightening to me if it was completely random. It is true that there are lots of mentally insane people out there, and that such things happen all over the country, and to anybody. However, in light of the horrifying commentary about Muslims and Islam these last few weeks in conjunction with the controversy over the Islamic Center in downtown Manhattan, such an incident becomes haunting. The NY Times this week had at least ten articles written about this cultural center, but what is of course fueling the media frenzy, are the emotions. Many New Yorkers wouldn’t consider themselves to be racist, but when they speak of Arabs and Muslims, some begin to show their worst side. A lunatic minister in Florida wants to burn Korans in a bonfire, and although we can claim Florida is provincial, that still feels too close to home for me. Passersby are shouting out xenophobic and racist insults at civil rights supporters of the cultural center. This is a cultural center for God’s sake, it just happens to be for the Muslim community! But this controversy has managed to expose America’s underbelly, the racist past they apparently cannot separate themselves from.

There are leaders who have spoken up for respect and adherence to our beloved Constitution. I have newfound respect for Bloomberg in the way he handled the situation. He has spoken up openly and without shame, even attending Iftar dinners. Although Obama has been criticized for not speaking out enough, he did make an important statement reminding all of the importance of our freedom to practice any religion. Can we expect any more from the man who was called a Muslim, in the most derogatory way possible, when he was running for president ? But where are the religious leaders? Isn’t it their role to teach people right from wrong, to give advice, calm, and educate their constituents about common decency and peace? Will they not summon up the courage to quell the anger rising in these people’s hearts? Priests, rabbis, and imams need to meet, and discuss and not find excuses for this type of attitude. We need an outcry rising through the pulpits and temples and mosques. The Muslims need to be reminded that they should not fear, and that they should practice as they always have. Something needs to be done or we are slowly and bitterly falling into a world reminiscent of Europe in the 1930s, one incident leading to another, hatred and fear growing, and finally a society so divided, people will wonder how we got to this point.

It is true that at least we can have a debate in the US, unlike in today’s Europe where far right wingers are basically neo Nazis under a different cloak. But words of hate and rage need to be subdued. Especially during the month of Ramadan, when more than ever, the majority of Muslims, the normal tolerant ones that do not make the news, are on a spiritual journey with their community. It is truly disrespectful and heartbreaking that so much hatred has managed to penetrate the holiest and most peaceful month for all Muslims. I am impressed by the lack of response by these same Muslims, who have managed to contain their fear, their anger, their shock, before these ignorant people who have politicized their religion. We all mourn the loss of lives of 9/11, as human beings with hearts and souls. But enough is enough! American Muslims need not bear the burden of it. We need not apologize for what happened. It wasn’t our doing.
Posted by PinkTaxiBlogger at 3:40 PM