My Own Conceptual Art 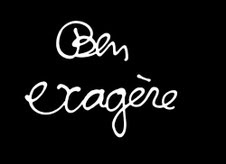 A stubborn minority of art collectors, (especially in the Middle East) cannot understand the concept of buying photography at the price of a hand painted oil on canvas. The reluctant purchaser will say: "I can take that photo myself" or "it's just a photo, can't the artist sell hundreds of copies?" with the same logic used a few decades ago  when placed in front of modern abstract art: "my four year old can paint that" or "it's a white canvas".

I must admit that if I considered purchasing an installation, or a now more common idea of a video installation , many thoughts would come to mind: "but why buy a ten minute video, that I would be bored of watching, that would play ad nauseam?" or "would I even bother playing it, dimming the light?" or "won't this video technology become obsolete?" I think a good first step, a leap of faith, would be to buy an important artist, like Shireen Nishaat, and have a film of hers to play ad nauseam. Otherwise, Farideh Lakshai has a solution for the weary like myself: buy her painted canvas with the option to project a video on it whenever you want.

I have never claimed to have artistic talent and thus the following anecdote is merely for humor's sake.  My daughter and I, last year, spontaneously decided to make our own installation , with fine art as the material and photography as the medium.

I own two canvases by the French artist Ben Vautier, always known simply as Ben, who writes two to three word sentences (sometimes the sentences are nominal) recognized by most from his ubiquitous handwriting. He now illustrates calendars, backpacks, hats, tshirts, notebooks etc. Recently his project was to decorate the  tram line stops in Nice: the names of the stops are written in his hand writing, and he has added below each destination, his  clever one liners. For example, one says: "attendre l'impossible" (waiting for the impossible), another says "Ben exagere" (Ben exaggerates). The pieces I own say "Libre de s'aimer" (free to love one another) and "Besoin de l'autre" (in need of the other).


I needed to stretch these two canvases one day. The framing store is two blocks away from my house in Geneva, so I decided to walk,  one painting at a time. When my daughter and I walked with one painting or the other, pedestrians stopped and laughed, motorists honked and waved. I then decided to take a photograph of each painting, in random areas on the way to the framer: next to the traffic light, in front of a bed of geraniums, against the postman's bike, with a coca cola sign. We both had lots of fun doing this little project, bringing each of the canvases to life. It gave Ben the dynamism he thrives on. His art took on another dimension. 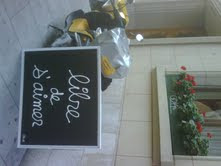