Art at its Source 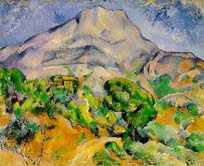 When I visited Provence in the 1990s, I discovered the real thing: le Mont Saint Victoire in all of its glory. This mountain can be found near Aix en Provence and  was made famous by Cezanne who painted it on many occasions. On that visit, after we drove through beautiful winding roads that led us closer to the celebrated mountain, we hoped we could find a Cezanne museum or at least a museum with some of  Cezanne's renditions of le Mont Saint Victoire. However, we soon found out that most of those paintings were dispersed in the United States,  Japan and perhaps  Paris. Provence was once considered "la province" (the backcountry), too provincial, and not deserving of the likes of  Cezanne, whose works originated there.


The same can be said of the original villa of Renoir in Cagnes sur Mer on the Cote d'Azur. The Villa with its original furnishings is open for visitors. However all the Renoirs we saw there were his easel and brushes, some sketches, a couple of etchings on oil and the garden to remind us of the green shrubs where his granddaughters played in navy suits with hoola hoops (cerceaux in French). Again, his most beautiful paintings are in American museums, at the Quai d'Orsay, in Japan, in Moscow and  with some lucky private collectors.

I have not been to Giverny to stroll on Monet's most celebrated little garden bridge above the waterlillies. However I have seen those waterlilies of Monet in one of his largest canvases at the Fondation Bayerli in Basel, Switzerland. All his waterlilies were also in a major exhibit at the MOMA in NYC last year. Again, far from its source.

Russians and Americans and later Japanese have become the three largest art collectors of 20th century art. The art that was bought by private collectors and institutions gradually made their way to the Ermitage in Moscow,  the National Gallery in  Washington DC, the Metropolitan in New York and the many other well endowed American museums (Chicago, Boston, Los Angeles) and on exhibit in lobbies of  Japanese multinationals.


Despite the fact that their art has been scattered far from its source, the French shouldn't complain. Along with the English, they have collected and preserved the largest collections of Ancient Greek, Roman and Egyptian art, using their reknown expertise and methodology. In doing so, they have educated the billions of tourists that have visited the Louvre and other such impressive museums, enabling them to  view all these antiquities in one locale.  These museums were also the only to represent islamic art until recently, when the Met in NYC opened a wing with artifacts of the islamic world.

Another important islamic art museum is of course the  Museum of Islamic Art in Doha, Qatar, built by I.M.Pei, and which  has become a destination museum, as equally impressive as the Frank Gehry in Bilbao (a city visited solely for its museum and its architectural prouesse). Museums are thus beginning to blossom in unusual cities, what the French would probably call "la province", since the day I drove to Mont St Victoire country for the first time.
Some of the most distinct and special museums that I try to visit yearly on my visits to the South of France are those created by the artists during their lives, exhibiting only their works in a small and unique enclave. Picasso's museum in  Antibes, Leger's  in Biot and Matisse's in Nice all shouldn't be missed. A few remaining examples of art displayed at its source. 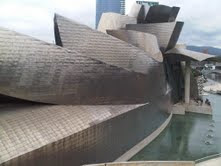 Posted by PinkTaxiBlogger at 10:50 AM