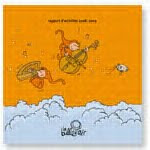 I found a magical music and arts center for children in Geneva called "La Bulle d'Air". An Orange poster drew me in 8 years ago, when my first born was 18 months. The picture was of dancing elves playing musical instruments. Every summer since, I have enrolled my children in  their  day camp  program.

We began with "Mommy and Me" classes. Once a week, a violinist made us sit in a circle and taught us classic songs, while we played various instruments along with him. It was then that my son discovered the violin and it wasn't long before he took violin classes while still in diapers!

When we left for Dubai, the music classes for infants at Jumeirah Music Center were above satisfactory and  represented an introduction to music theory to my children. However the classes lacked the "ambiance" of those early Bulle d'Air classes. This may be due to the cultural barrier: we much prefer to sing in French for example, but the atmosphere without a doubt was different.

First of all,  there are no grungey teachers in Dubai.  No organic meals are served after class either. La Bulle d'Air must have the largest collection of musical instruments you are "allowed to" handle. When my four year old son took an "orchestra class" there, he played with wind instruments, drums, strings, and keyboards. My daughter concentrated on African instruments and built her own "djembeh" with goat skin. Her teacher was from Burkina Faso and also was a talented guitarist that would get most campers singing simple African songs or more complex French ones. On any day that I pick them up from the lovely and elegant villa that hosts La Bulle D'Air classs, I can always hear guitar or piano notes slipping out into the large garden where kids have their lunch and play hide and go seek behind the trees.

La Bulle d'Air isn't just a music center. My kids have taken drama, arts and crafts and painting, and even interdisciplinary classes that focus on a theme like the circus, the desert or dragons and integrate theater, painting and music. It is truly a center for the arts.

Here below, especially for the French readers, I have added the lyrics to a song the kids have learnt at Bulle d'Air this summer. My favorite part is the "zeste deplace!"