I recommend the movie Blindness to all who have read the novel by Saramago. Warning! Spoiler alert: if you plan on watching the movie, stop reading now, and come back later to read this review and share your own thoughts about the film! I felt that the movie turned out to be a very good interpretation of an extraordinary novel. I don't say excellent because of one point which I will bring up at the end.

The movie's leitmotif is a white screen that falls like a shutter between various scenes, reminding us of that first feeling that overwhelms the population, as blindness hits them.What is extraordinary in both cases, is that we are either reading or watching "Blindness", and those two activities require sight! One third of the movie takes place at the hospital where the contagious people have been quarantined. This part of the story is certainly the most horrific of the tale. Those who have seen the movie without reading the book advised me that the scenes are gory, even disgusting. They had not seen what the readers have read! In the book, the horrors are juxtaposed in a long dreadful collection of dirty and violent images. In fact, the "asylum" in the film was as I imagined it, brown and clinical, and the entrance where the blind plead for food to the soldiers is precisely how I had imagined it while reading. Perhaps because Saramago was so detail oriented in his descriptions that the film director and I understood it in exactly the same way.

The only new thought that occurred while watching the film was the resemblance of the "asylum" to the sanitorium in Thomas Mann's "Magic Mountain". Another artistic analogy is the director's nudes are very Lucien Freud looking.


When selecting the cast, the director of the movie immediately gives importance to the Doctor's Wife (played by Julian Moore) and to the evil blind man (played by Gael Bernal) who leads rapes, theft and uneven food distribution. Bernal's role is surprisingly small. Yet Moore's is dominant and even more so than her character in the book. In the book she is the only one who sees. Through her "seeing"eyes we experience the world around her but because she lives with the blind they don't tell us much about her! Her exclusive sight is a burden because she has to lead and care and also "see" the horrors around her.


Film directors always declare that their films are "loose adaptations" of the novels. In this case, the added American humor is an addition. The bad guy sings "I just called to say I love you" by Stevie Wonder because it suits Bernal to play with sick humor. The director also selects his characters to be multiracial: the first man to go blind is a Japanese who speaks Japanese to his wife throughout the movie. The man with the eye patch is black. None of these details are mentioned in the book, nor is it mentioned that they are all white. The director sets the story in an anonymous North American city while I had imagined it to be an Iberian city considering the author is Portuguese.

The first scene in the book is the best scene. A man gets blind in his car while stopping at a red light. It is also the best scene in the movie. In both cases, we are drawn in by the drama of the moment. The film director offers the first blind man and the doctor very nicely furnished homes. Very little of the elegance of their apartments is mentioned in the book.


Nevertheless, the film and the book do not end in the same way. I got the impression that in the film, the end loses its steam, the editing perhaps poor because  the first two parts of the film take up much of the film, while the denouement is abrupt. Luckily, the director cut out a few scenes in the end, such as the old woman eating the rabbits, but when the blind regain their eye sight one by one in the book,  the director only portrays the first man to regain it. I would have liked to see the impact of each of them. Furthermore, the doctor's wife turning bling was not made clear while Saramago had orchestrated it beautifully in the novel.  For this reason alone, my opinion of the film went from excellent to good. I hope you all liked it too! 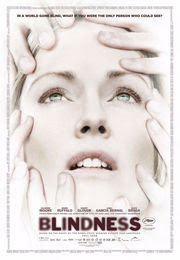