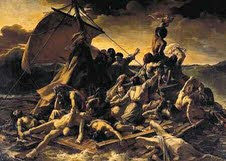 I always enjoy reading Ali Khadra's editorials in his position as Editor-in -Chief of Canvas. In the Summer Issue 2010, he asks the important questions we have all wondered about, in the wake of Christies' extremely successful sale of Modern Egyptian Art.


It goes without saying that the Middle East art market, which has become very dynamic in the last five years, fluctuates depending on the results of sales at auctions. Both Sothebys and Christies make excellent selections of art lots. These events are educational as well as commercial. Therefore when William Laurie of Christies curated a superb sale of pieces from the Al Farsy collection, he was setting a trend: encouraging the collection of Modern Middle Eastern Masters. The time may come for a finer appreciation of Omar Onsi and Saliba Dweihi, the latter having been highly recommended by Sotheby's Dalya Islam.

In his editorial, Ali Khadra questions the collectors' picks for understandable reasons. Which artists will make it, he ponders. The answer to his question lays in the pages of his own well documented Canvas Summer Issue. At Basel this year, Ghada Amr and Youssef Nabil sold with success. What these two artists have in common, besides being Egyptians living in the USA, is that they have pushed national and cultural boundaries. Their art rarely alludes to the Middle East and if it does it is because they are revealing their soul or their past.  These two artists, alongside Lara Baladi, Mona Hatoum, Kader Attia, Djemel Tatah, Shireen Nishaat and Reza Aramesh have been trained in the West, and this is evident in their work. Their artistic endeavors do not clash with self censorship or a forced attempt to recreate "home".


If you take a closer look at Reza Aramesh's photographic work, you will notice a few things. He creates masterpieces, without a doubt, consisting of  black and white staged photographs of men in modern urban clothing (jeans, t shirts, sneakers, sometimes bare chested) set inside museum, in poses that are deliberately imitative of historico-journalistic events. This work, which requires research, directing, high standards of photographic vision, is only Middle Eastern because the photographer is Iranian and because, sometimes the images have a political or religious componenent to them. Often, and especially at first glance, the Diesel clad actors fit the "Middle Eastern" terrorist stereotype, but that is an ironic "clin d'oeuil".


I have selected two of my favorite pieces by Aramesh. I have been fortunate enough to discuss them with the photographer himself. He was startled by my analogies, because he had not even considered, consciously at least, that he could  have been influenced by the paintings I had assumed had inspired him. In fact we looked up the "Radeau de la Meduse" by Gericault to discuss my point. The commonalities are the triangular composition of both pieces, with the men accumulated on top of each other, the box prop Aramesh uses as a reminder of the wooden raft and the man with the T-shirt on top of his head like the flag of surrender in the painting. Only the exquisite curtains and the fireplace make it different.


The other photograph of the single shirtless man, his hands tied in captivity behind him and the proud look on his face, so similar to that of San Sebastian, as painted many times during the Renaissance. Only in the photograph, the actor stands on his knees in the center of a perfect circle, checkered the way the floors were in the Renaissance days.

If I can dispense any advice it would be to buy contemporary art that has no cultural boundaries like Aramesh, Neshat (she doesn't just photograph women in veils!), Nabil, Attia, Amr, Baladi and Hatoum. They are great artists no matter their national affiliation. 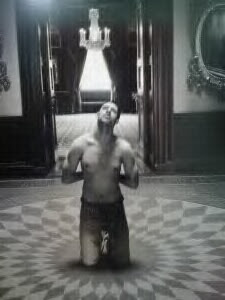 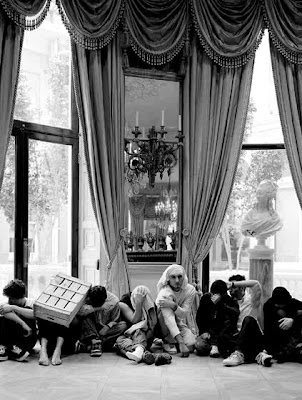 Posted by PinkTaxiBlogger at 7:15 PM