Fondation Beyeler in Basel is a destination in itself. An art pilgrimage I always enjoy. I may have taken the train from Geneva three times in five years  in order to visit this small museum by R. Piano. I love the way it fits in the garden and the pond of lilies there! I decided to return there a few days ago with my daughter, and given that it is Ramadan, I was fasting.

Last year, in August, I happened to also be fasting when I paid my visit and saw the beautiful collection of Giacometti they had at the time. This same collection was at  the Fondation Maeght in St-Paul -de -Vence this summer.  I believe that both of the buildings at these foundations have been designed to welcome Giacomettis. The sculptures can be seen from the outside, because the  1950s/1960s architecture of both institutions allowed for large windows. Both Maeght and Beyeler were avant guard collectors and gallerists: the first chose a Mediterranean village while the latter picked a Swiss city.

The geographic locations of their foundations of course makes for slight differences in their architecture. The Basel museum's stone of preference is marble whereas the one in Saint Paul de Vence is built of concrete and a certain granite that reminds you of the sea. While both collectors supported Giacometti, a rather pioneering stance, I believe that Beyeler was the most vanguard of the two because he also bought many Basquiat pieces and endorsed him fully. He even compared him to Picasso!

The exhibit of Basquiat at the Beyeler Foundation is a once in a lifetime opportunity to witness such a large number of this artist's works in such an incredible place.. The show was curated by Sam Keller, who has worked between Art Basel and the Beyeler Foundation. I believe Keller to be amongst the most  reputable in this field. It was not the  way the art was mounted, or the explanations that made the curating job impressive. In fact, titles, materials and provenance were indicated on very simple stickers next to the paintings, and I even had to search for the English translations with some difficulty.

What did impress me were the tremendous amount of works by Basquiat, most of them on huge canvases, one of higher quality than the next. The provenances, except for four specific ones (MOMA,  The Whitney,  The Rotterdam Museum and the Basquiat foundation), were from private collections. An estimate of 90% of the Basquiats there were owned by smart and privileged collectors such as Mograbi, an Egyptian who also collects Warhol, and also by galleries that are holding on to the last works by Basquiat not dispersed yet (mostly galleries in Zurich and in New York).

Basquiat had a very short , yet prolific career of  fifteen years, in the early 1980s, but his works sold very quickly after his death. These rich works, an amalgam of graffiti, pop and primitive art never really made it to the museums. The collectors are probably still alive and have not made their donations yet. I could foresee any of the large canvases that I saw at Beyeler, breaking records at auctions.

I quizzed my daughter before each painting, an exercise for me to assess the works better. I asked her about the artist's use of colors, the images he chose to portray and what she thought about each of them. We noticed a thread in his paintings of crowns and smiles resembling zippers. She recognized his Haitian heritage from the African masks in many of the paintings, that she had been reading about this summer.

Given that I was fasting, the aggressive colors, pictures, and the sheer amount of paintings made me fell dizzy, in a fantasmagorical way. I almost felt like I was tripping (not that I would really know how that actually feels!).  I lingered in front of a specific canvas that caught my eye, asked my daughter to look closely ,and she also noticed the footprints of Basquiat, or should I say  sneaker prints, perhaps 6 of them. She guessed: that his shoes probably had traces of paint and that he had nonchalently walked over the canvas that he had thrown on the ground...on purpose, because he could!

We made sure to end our visit at the Beyeler by viewing its permanent collection of Ellsworth Kellys in the garden, Jackson Pollocks, Picassos, Mondrians, Van Goghs, large Monets, Lucian Freuds, Kandinskys, and of course Giacomettis. Beyeler  only collects the best. However most of these artists required Beyeler's support and recognition at some point in time . He discovered many of them and invested in their talent. The same talent that made Basquiat larger than life. 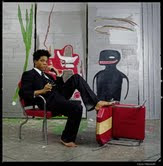 Posted by PinkTaxiBlogger at 5:43 PM